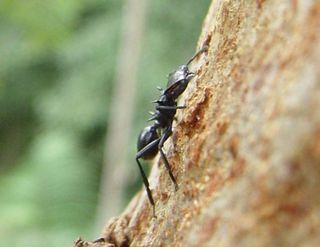 One of the ants in the new study.
(Image: © Stephen Yanoviak)

Add ants to the list of animals that can fly. Worker ants, the wingless kind.

Scientists call it gliding, or directed aerial descent. But just as one might say that flying squirrels fly, so do a type of ants called Cephalotes astratus. They live in rainforest treetops, and their newly discovered ability is a lifesaver.

Stephen Yanoviak of the University of Texas Medical Branch and University of Florida made the discovery by accident about two years ago while collecting mosquitoes for an unrelated project in the rainforest canopy near Iquitos, Peru.

The finding was announced today.

"When I brushed some of the ants off of the tree trunk, I noticed that they did not fall straight to the ground," Yanoviak told LiveScience. "Instead, they made a J-shaped cascade leading back to the tree trunk."

Yanoviak started marking the ants with paint to follow their amazing journeys up and down the trees. He discussed the findings with Michael Kaspari of the Smithsonian Tropical Research Institute in Panama and the University of Oklahoma. A third colleague, Robert Dudley, with the University of California and also the Smithsonian, was brought in to create high-speed videos of the gliding wonders, among other things.

The Cephalotes astratus ants are large and have spines on their backs. They look like "the Darth Vaders of the ant world," the researchers say. Here's the head of one compared to another ant species. Credit: UC Berkeley See Video of the Gliding Ants >>>

The team found that the ants downward journey comes in three phases: a two- to three-yard freefall and attempt to slow down, followed by a rapid mid-air turn back toward the tree trunk, and finished off with a steep but directed glide to the tree trunk.

The remarkably adapted ants are the first animals found to consistently glide backwards, other than microbes, some of which spend their entire lives gliding in directions hard to call backwards or forwards.

Yanoviak and his colleagues discovered that the gliding ants are able to return to their home tree trunk 85 percent of the time.

Once they make contact again with the trunk, the ants either cling to it with their sticky toes (called "tarsi" in ants) or fall a few more yards before gaining a foothold, at which point, they begin their march back up the tree, often returning to the exact point from which they dropped and typically within 10 minutes of their initial fall. Experiments one with blinded ants found they rely on their vision to detect the tree trunk and guide their descent.

Smaller ants fell shorter distances. The scientists also found that ants called Pseudomyrmecinae were able to glide, but other arboreal ants they tested could not.

These results are published in the Feb. 10 issue of the journal Nature.

The falling ants' first phase is called uncontrolled parachuting because they splay their legs in all directions in an effort to slow their fall by increasing drag. However, parachuting animals technically lack control over their trajectory.

Gliding or directed descent is initiated in phases two and three when the ants turn around and gain control over their flight path.

Their typical falling speed is 8 mph (4.3 meters per second), a fast clip for a creature less than a half-inch (1 centimeter) long. Sometimes, the tiny creatures bounce off the tree trunk the first time they hit it. When that happens, they're able to recover control rapidly and glide right back to the tree, Yanoviak said.

For arboreal animals, the ability to glide or fly or even parachute can be a life or death matter. Ants are frequently buffeted about by the wind or nearby mammals and birds, which can knock them off a branch or leaf to start tumbling down to a risky place -- the forest understory comprised of the shrubs and trees that grow between the rainforest canopy and the ground cover. Moreover, some ants will voluntarily drop off tree trunks when approached by a foreign object.

In any case, the ability to self-rescue comes in handy. The understory and forest floor are full of hazards, not to mention terrain that is tough for tiny navigators, Kaspari said.

"An ant falling to the forest floor enters a dark world of mold and decomposition, of predators and scavengers, where the return trip is through a convoluted jungle of dead, accumulated leaves," Kaspari said. "Gliding is definitely the way to go, and we won't be surprised if we find more examples of this behavior among wingless canopy insects."

Gliding is thought to be an important stage in the evolution of flight, scientists say.

A fall of 30 yards is a huge distance for a canopy ant -- 3,000 times the animal's body length. For a human, this would be equivalent to being tossed 3.5 miles and then having to walk back home (although humans have different biomechanics and energy reserves that ants lack).

Ants often rely on chemical trails to find their way back to the nest. If they land in the understory and cannot find a trail or some other cue to get home, they are lost forever. Like many animals, ants are dependent on the work and contributions of the entire group, so the loss of any individual ant that falls and never returns is costly.

For this reason, evolution has favored traits like sticky toes and the ability for directed aerial descent to prevent the loss of workers, Yanoviak said.

The ants glide backwards because their hindlegs are longer than their forelegs. It is probably easier for them to get a quick grip on the tree with their hindlegs, as if using a fishing gaff or grappling hook, Yanoviak said.

It could also be that the shape of an ant's body only permits directional control in the air when facing backwards. However, Yanoviak said he recently discovered a type of ant called Camponotus that glide to the tree head first. "The story will undoubtedly get more interesting the more we work on it," he said.

Other arboreal creatures that can glide include lizards, frogs and snakes. Still no word on whether pigs can fly.