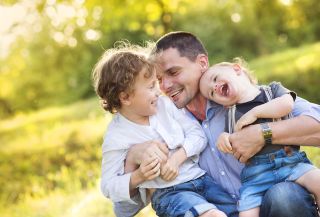 Oxytocin — the "love hormone" perhaps best known for stimulating bonding between mothers and newborns, or between romantic partners — may also play a role in dads' empathy toward their toddlers, a new study suggests.

Researchers found that fathers who were given a boost of oxytocin via a nasal spray, and then were shown a picture of their 1- or 2-year-old sons or daughters, showed higher levels of activity in regions of the brain linked with empathy and reward, compared with fathers who did not receive a dose of oxytocin.

This increased activity in the men's brains may elicit greater feelings of empathy and reward processing, and may motivate fathers to become more involved in caring for their children, said study author James Rilling, a professor of anthropology and psychiatry and behavioral sciences at Emory University in Atlanta.

"It may also help fathers to interact with their children in a sensitive and emotionally responsive way," Rilling told Live Science. [11 Interesting Effects of Oxytocin]

The new findings were published Feb. 17 in the journal Hormones and Behavior.

Previous research has shown that oxytocin is released when people snuggle up or bond socially. The hormone is produced by the pituitary gland in the brain, in people of both sexes.

"Most people still think of oxytocin as a female hormone," Rilling said. Although the role of oxytocin has been better studied in women, in recent years researchers have started to investigate its potential effects in men.

It's well known that pregnant women experience a big release of oxytocin during labor, which promotes uterine contractions, as well as during breast-feeding, which stimulates the flow of breast milk, Rilling said. These dramatic hormone changes in pregnant and nursing women are believed to help prepare them for becoming mothers and caregivers, he said.

The new research represents one of the first forays into understanding what the hormone does in human males, and the findings provide evidence of oxytocin having a definite effect on fathers, too, Rilling told Live Science. [5 Ways Fatherhood Changes a Man's Brain]

There have been only a couple of human studies to date that have explored the role of oxytocin in the brains of fathers, Rilling said. In one study, done in 2014, oxytocin levels were shown to be higher in men who were married and had children, compared with men who were neither married nor fathers. In another study, done in 2010, oxytocin levels were found to increase in men over their first six months of fatherhood.

In the new study, researchers looked at 30 fathers of 1- or 2-year-old children. Half of the dads were given either a dose of oxytocin as a nasal spray or a placebo before undergoing a brain scan. The other 15 men, meanwhile, were given a dose of another pituitary hormone, called vasopressin, which is also involved in social bonding, or a placebo before the brain scan. The amount of oxytocin given to the men was thought to be within the range usually present in fathers.

The results showed that fathers who were given oxytocin — but not vasopressin — had increased activity in brain regions involved in reward, empathy and attention, but only when shown a photo of their own child and not in any of the other scenarios of the experiment. [7 Baby Myths Debunked]

The findings show that there are dramatic hormonal changes in men that prepare them for becoming fathers, Rilling said, and oxytocin is one of the hormones involved in this process.

However, Rilling cautioned that not all fathers may experience these hormonal changes. For example, he said, other studies have found that testosterone levels in men can decrease when they become parents, but only if they are actively involved in caregiving.

Hormonal changes, such as a boost in oxytocin and a decrease in testosterone, in fathers can have big benefits: They can prepare men to be more interactive with their infants, and care for them in a sensitive and compassionate way, Rilling said.

The exact mechanism of how these changes in hormone levels occurs is not yet known, Rilling said. He speculated that there could be some cues coming from the baby, such as the infant's appearance, smell or touch, that stimulate oxytocin production in fathers. These hormone changes may tweak the brain function of fathers and motivate them to get more involved in caregiving, which could possibly perpetuate a positive cycle of the father's involvement, he said.

Although more research needs to be done to understand the brain mechanisms involved in this process, the study results may someday be helpful to men who suffer from deficits in paternal motivation due to drug dependence or postpartum depression, Rilling said.

Studies can explore whether giving these men oxytocin could potentially increase their ability to engage with their children, he said.