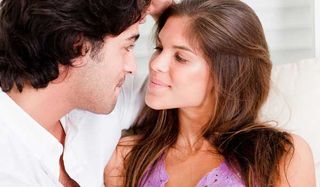 The "love hormone" oxytocin may help maintain romantic relationships by prompting men to keep their distance from attractive women, a new study from Germany suggests.

The oxytocin spray had no effect on the distance that single men chose to keep between themselves and the attractive woman.

The results suggest the hormone promotes fidelity in humans, said study researcher Dr. René Hurle­mann, of the University of Bonn.

The findings agree with previous research conducted on prairie voles, which suggested the hormone plays a role in pair-bonding.

In humans, oxytocin has been found to promote bonding between parents and children, increase trust, and reduce conflict between couples. And earlier this year, a study found that couples with high levels of oxytocin in the early stages of a relationshipwere more likely to be together six months later than couples with lower levels of the hormone.

But until now, there has been no evidence that a dose of oxytocin given after a couple gets together contributes to the maintenance of the relationship, the researchers said.

The study involved 57 heterosexual males, about half of whom were in monogamous relationships. After receiving either a dose of oxytocin or placebo, participants were introduced to a female experimenter who they later described as "attractive."

During the encounter, the experimenter moved towards or away from the men, and they were asked to indicate when she was at an "ideal distance" away, as well as when she moved to a distance that felt "slightly uncomfortable."

In a separate experiment, the researchers found oxytocin had no effect on the distance men kept between themselves and a male experimenter.

Future studies are needed to determine exactly how oxytocin might act on the brain to affect behavior, the researchers said.

The study will be published tomorrow (Nov. 14) in The Journal of Neuroscience.

Pass it on: Oxytocin may promote fidelity by prompting men to keep their distance from attractive women.