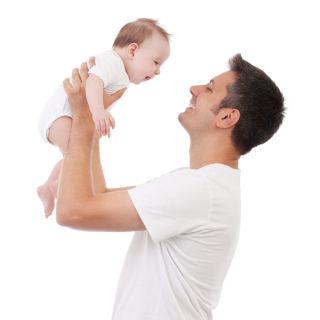 Men planning to have kids may want to keep an eye on their biological clock: A growing body of research suggests that children born to older fathers are at higher risk for psychiatric and academic problems.

In a new study, researchers found that the increase in risk of problems may be even larger than previous estimates.

Researchers looked at health data on everyone born in Sweden between 1973 and 2001 (more than 2.6 million children), and compared the risk of various mental-health problems in children born to older fathers to that of children born to younger fathers. The researchers also included comparisons between siblings and cousins.

The children of older fathers were also at higher risk for psychosis, suicide attempts, substance abuse, failing grades in school and low educational attainment, according to the study, published today (Feb. 26) in the journal JAMA Psychiatry.

"I think this body of research should inform couples, doctors and the society at large about the pros and cons of delaying childbearing," said study researcher Brian D'Onofrio, an associate professor of psychology at Indiana University.

"We are not saying that every child born to an older father is going to have these problems," D'Onofrio told Live Science. "But this study adds to a growing body of research that shows that advancing age is linked to some rare but serious problems. Moreover, our study suggests that this increased risk is, in fact, larger than previous estimates."

Historically, researchers and mental-health professionals have focused on mothers' ages in relation to childbearing. "Only recently has research started focusing on fathers' age," D'Onofrio said.

Unlike women, who are born with all of their eggs, men continuously produce sperm, and the older a man gets, the greater the chances there will be genetic mutations in his sperm. These mutations are passed on to children, without affecting the man himself. That's why a man's age at childbearing may be related to his child's risk for disorders that are linked to new mutations, such as those linked with autism and ADHD, the researchers said.

A number of earlier studies have found links between fathers' advanced age and psychiatric or developmental disorders in their children. However, it is unclear whether personality traits, hereditary features or some environmental factors underlie the link, because most studies compare children born to young fathers to unrelated children born to older fathers.

The researchers also compared firstborn children with their firstborn cousins who were born to fathers of different ages, to account for possible effects of birth order.

"What we found was that, every way we analyzed the data, we reached the same conclusion," D'Onofrio said.

The researchers also looked at mothers' ages, and found that children with older mothers also had an increased risk of autism, ADHD and bipolar disorder.

However, older maternal age was also linked with a decreased risk for substance abuse, failing grades and educational attainment in children.

"Advanced mother's and father's ages may be protective for children in the sense that it is associated with better caregiving, more financial security, better monitoring — all of these things that we know from other psychological studies," D'Onofrio said.