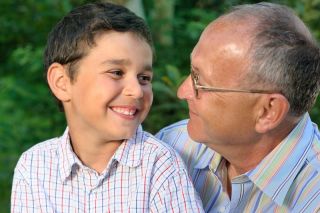 A 50-year-old dad will pass on four times as many new mutations to his kids than would a 20-year-old father, according to research detailed in the journal Nature on Aug. 23, 2012.
(Image: © Timurpix, Shutterstock)

The older a father is, the more likely he will pass new mutations to his children, upping the chances of disease, researchers say.

"A 36-year-old father gives twice more new mutations to his child than a 20-year-old father does, and a 50-year-old father gives about four times the number of mutations," said researcher Kari Stefansson, chairman and CEO of deCODE Genetics in Reykjavik, Iceland. "This is not a subtle effect — this is a very, very large effect. And it increases the probability that a mutation may strike a gene that is very important, which can lead to a disease."

Past studies have linked a father's age at conception to the risk of schizophrenia, autism and other mental disorders. The new research links new mutations to these same diseases — mutations seen in patients but not in their parents.

Genetic errors crop up in the body over time, and scientists had conjectured that older parentsaccumulate more mutations in their sperm and egg cells than younger ones. To better understand the rate at which novel mutations emerge over time, researchers sequenced the entire genomes of 78 Icelandic trios of parents and offspring.

The scientists found that the age of the father at conceptionwas by far the dominant factor in determining the number of novel mutations in children.

"Roughly 97.1 percent of the diversity in human mutation rates appears due to the age of the father," Stefansson added. "There is nothing else on the population level that impacts the level of mutations in the human genome as much as the age of the father." [History's 12 Most Doting Dads]

On average, about two new mutations are added for every additional year of a father's age at conception.

"If you compare a 40-year-old father with a 20-year-old father, the 40-year-old is twice as likely to develop a child who develops schizophrenia or autism," Stefansson said. "We know there's been a fairly dramatic increase in the diagnosis of autism in society — perhaps part of that may be accounted for by the recent increase in age of fathers."

Still, although the researchers found that older fathers are at greater risk than younger fathers of passing on new mutations, "the absolute risk of older fathers conceiving a child that has a life-threatening mutation or other mutation that affects them is still relatively small," Stefansson cautioned.

In addition, although more mutations might seem damaging, and often can be, the novelty that mutations generate in genomes is a major driver of evolution. "The more mutations we have in the human genome, the more there is diversity for nature to select from," Stefansson said.

Future studies can investigate whether these mutations are randomly distributed across the genome or whether there are hotspots within the genome for mutations. The scientists are also interested in what percentage of disorders such as autism and schizophrenia are due to new mutations versus inherited mutations, Stefansson added.

Stefansson and his colleagues detailed their findings in the Aug. 23 issue of the journal Nature.