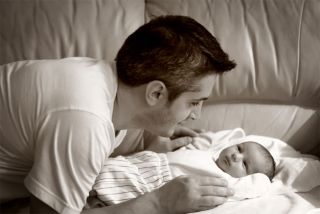 The so-called "love hormone," known for its role in strengthening the connection between mothers and babies, also makes for a healthy father-baby bond, new research shows.

The study, headed by psychologist Ruth Feldman at Bar-Ilan University in Israel, used blood samples from 80 cohabitating couples to chart the levels of the hormone oxytocin in first-time parents during the first weeks of parenting, and again after six months. Researchers also correlated the oxytocin levels with videos of parents interacting with their babies.

The bursts of oxytocin that women experience during birth and breastfeeding have been documented, so the mothers' high oxytocin levels didn't surprise researchers. What did surprise them was the fact that even without these huge hormonal triggers, fathers showed levels of oxytocin matching those of mothers during both time periods.

What gave dads that lift? Oxytocin levels in men were triggered by stimulatory parenting: tossing the baby in the air, pulling the little one up to sit, or encouraging exploration and laughter.

A mother's oxytocin levels, by contrast, were related to affectionate parenting such as soft hugs, caresses, light pokes, baby talk, or simply gazing into the baby’s face.

"It's possible that oxytocin is related to the type of behaviors from which mothers and fathers derive the most reward," Feldman wrote in the Aug. 15 issue of the journal Biological Psychiatry. "Infants tend to prefer fathers as playmates when they are positive and choose mothers for comfort when distressed. The infant's preference may be of a high reward value for the parent, and thus, although mothers and fathers displayed similar levels of affectionate and stimulatory play, oxytocin may be linked to the behaviors each parent found the most rewarding."

Furthermore, the research suggests parents' oxytocin levels are directly related; even though the hormone level is relatively stable over time, fluctuations were found to coincide in partners. So when dad's levels were high, so were mom's.

This could have implications regarding postpartum depression in women with low oxytocin. One of the first signals of depression in mothers, Feldman said, is that they don't touch their infants affectionately.

"We have preliminary findings from a five-year follow-up of postnatally depressed moms that show that both depressed moms and their husbands have low oxytocin and lower affective involvement and positive play with their kids," Feldman told LiveScience.