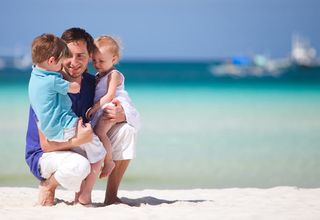 Fatherhood can change a man's life. It also changes his brain, in ways that it seems to equip dads with the very same "baby sense" that's often attributed to moms.

From an animal kingdom perspective, human dads are unusual. They belong to a group of less than 6 percent of mammal species in which fathers play a significant role in rearing offspring. In these species, paternal care often involves the same behaviors as maternal care, with the exception of nursing. [History's 12 Most Doting Dads]

But how does fatherhood change a man's brain? Science has only recently delved into the neural and hormonal mechanisms of paternal care, but so far the evidence suggests that mothers' and fathers' brains use a similar neural circuitry when taking care of their children. Moms and dads also undergo similar hormonal changes that are linked to their brain and behavior changes.

Taking care of a child reshapes a dad's brain, causing it to show the same patterns of cognitive and emotional engagement that are seen in moms.

In one recent study, researchers looked at brain activity in 89 new parents as they watched videos, including some that featured the parents' own children. The study examined mothers who were their children's primary caregivers, fathers who helped with childcare and gay fathers who raised a child without a woman in the picture.

All three groups of parents showed activation of brain networks linked to emotional processing and social understanding, according to the findings published May 27 in the Proceedings of the National Academy of Sciences. In particular, fathers who were their children's primary caregivers showed the kind of activation in emotional processing seen mostly in primary caregiver moms. The results suggest there's a parenting brain network common to both sexes.

Studies in animals and people show that new fathers experience an increase in the hormones estrogen, oxytocin, prolactin and glucocorticoids, according to a recent review of studies by psychologist Elizabeth Gould and colleagues from Princeton University. [Men vs. Women: Our Key Physical Differences]

It remains unclear to what degree such changes in testosterone are the cause or the result of different parenting behaviors, the researchers said.

"Nevertheless, infant contact itself seems to modulate endocrine systems and activate neural circuitry in fathers in a manner that is strikingly similar to that in mothers," the researchers wrote in their study, published in October 2010, in the journal Trends in Neurosciences.

Although dads who participate in childcare show an increase in oxytocin levels, the reverse also occurs; the hormone seems to increase childcare behavior. In a recent study, researchers found that sniffing a dose of the "cuddle hormone" gets fathers more engaged while playing with their kids, and their children are more responsive in return.

Does this mean an oxytocin spray makes a good Father's Day gift? Not yet. The researchers warned that the hormone has a variety of effects on behavior, and not all of them are positive.

Fatherhood also affects dads at the neuronal level. The birth of a child seems to induce development of new neurons in the brain of fathers, at least in animal studies.

Researchers say that these new neurons may develop in response to what the scientists call environmental richness, that is, the new dimension that a child brings into the life of a dad.

Dads are sensitive to their children's voices

Although it is generally thought that a "maternal instinct" makes moms incredibly good at picking out their baby's unique cry, a recent study suggests that, in fact, dads are just as good as moms.

To compare parents' performance in baby-cry detection, researchers asked 27 fathers and 29 mothers to pick out their babies' cries, from among the cries of five infants. On average, parents were able to detect their babies' cries about 90 percent of the time, and men did just as well as women.