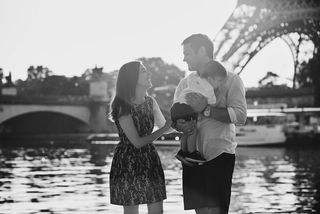 A hormone known for its role in bonding and caregiving could predict whether new moms and dads stay together in the first years of their child's life.

Researchers found a link between low oxytocin levels in the mother during pregnancy and shortly after the baby's birth and the likelihood that new parents would break up by the time their child was 2 1/2 years old, according to the results, presented Jan. 29 at the annual meeting of the Society for Personality and Social Psychology in San Diego.

"What these data suggest is that lower maternal oxytocin levels are associated with the risk of relationship dissolution by the time the child is a toddler," study researcher Jennifer Bartz, a psychologist at McGill University in Canada, told an audience at the meeting.

"Suggest" is a key word. The research has yet to be peer-reviewed and published in a journal, Bartz told Live Science, and the total number of breakups among the couples in the study was small.

Nevertheless, the research hints at how hormones might influence relationships, perhaps by altering how people cope with stress or handle caregiving, Bartz said.

"Ideally, the point of using neuroscience methods is, what we know about the biological processes can then deepen our understanding of the psychological processes," Bartz told Live Science. [11 Interesting Effects of Oxytocin]

Oxytocin is a powerful molecule, well known for promoting social bonding in animals. And research on humans has found that this hormone affects both parenting behavior and caring for the offspring of others, Bartz said.

In the new study, Bartz and her colleagues collected saliva samples from 341 pregnant women during their first trimester of pregnancy, in the third trimester and then seven to nine weeks after they gave birth. Then, they followed up with the women two and a half years later.

Of the 188 moms who could be reached at the last follow-up, about 90 percent (170) were still with their original partners. Seven had gone through breakups. (The rest had either been single the entire study period or had been single and were now in relationships.)

It's rare for people to break up in the first few years of their child's life, Bartz said — even if they're having relationship problems, parents are usually motivated to stick together for their kid. The reasons for the seven breakups in the study were unknown.

"There are lots of good reasons why it doesn't make sense to stay in a relationship," Bartz said.

But theseven women who had been through breakups had lower oxytocin levels during their first trimester of pregnancy and during the postpartum period than the women who'd stayed with their partners, on average. Each unit increase in oxytocin in the first trimester increased the odds of relationship survival by about seven times, Bartz reported, and each unit increase in the postpartum period raised those odds even more, by about nine times.

This doesn't mean, however, that the low oxytocin caused the breakups. It's possible, Bartz said, that women with high oxytocin might interact more smoothly with their infants, as per the hormone's role in bonding. Any improvement in mother-child bonding could have a ripple effect on the overall climate of the household, Bartz said.

Alternatively, high oxytocin levels could be a sign of a "tend and befriend" approach, rather than a "fight or flight" approach to handling stress, she said. Moms who tend to reach out for support rather than withdraw might cope better with the disruption of a newborn.

A third possibility is that a woman's oxytocin levels are not a reflection of her traits, but of her situation. Women with low levels of the hormone might not have as much social or partner support as women with high levels. In other words, something was rotten in the state of the woman's life, and the oxytocin was just a warning sign.

"Just because we've identified a characteristic in the mother doesn't mean it's causal," Bartz said.

Big questions remain, she said, including the partner's role in this puzzle.

A study that involved couples "would probably give us a lot of insight," she said.