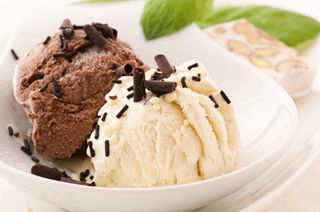 SAN DIEGO – Certain food additives may interfere with your gut bacteria, causing changes that boost inflammation in the intestines and potentially promote the development of some chronic diseases, a new study suggests.

In the study, researchers looked at ingredients called emulsifiers, which are added to many processed foods, including ice cream and peanut butter, to improve those foods' texture and extend their shelf life.

The researchers used a special piece of lab equipment that's intended to simulate the human gut, including its bacteria, and consists of a series of pumps and glass containers. The scientists added two emulsifiers called carboxymethylcellulose (CMC) and polysorbate-80 (P80), to a simulation of normal gut contents.

Adding the emulsifiers led to a dramatic increase in a marker of gut inflammation, said study co-author Benoit Chassaing, an assistant professor of biomedical science at Georgia State University. Chassaing presented the study here on Saturday (May 21) at Digestive Disease Week, a scientific meeting focused on digestive diseases.

The researchers then took the altered community of gut bacteria out of the lab equipment and implanted it into mice that didn't have any gut bacteria of their own. These mice also developed intestinal inflammation and showed signs of metabolic syndrome, a cluster of conditions that includes obesity, high blood sugar and insulin resistance.

The study shows that emulsifiers directly affect gut bacteria, Chassaing said. However, the researchers still need to test whether emulsifiers have the same effect in people, and so the investigators are already planning a study, he told Live Science. [5 Ways Gut Bacteria Affect Your Health]

The new findings add to those of a 2013 study by the same group of researchers, which found that emulsifiers promote the development of inflammatory bowel disease (IBD) in mice that are genetically predisposed to the condition. The 2013 study also found that emulsifiers were linked with inflammation in normal mice (that were not genetically predisposed to gut diseases). However, at the time, the researchers didn't know if the emulsifiers directly affected the gut bacteria, or if they instead affected the mouse's own cells.

The new study was able to rule out any impact of the mouse's own cells, because the simulator used is a mechanical model of the gut, the researchers said.

Emulsifiers are listed on ingredient labels, but the additives go by many different names, Chassaing said. This makes it hard to avoid emulsifiers simply by reading food labels. The best way to keep from eating emulsifiers is to avoid processed food, he said.