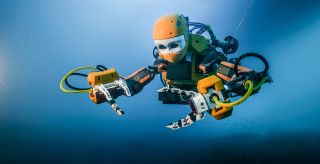 In Mediterranean waters, off the coast of France, a diver recently visited the shipwreck La Lune —  a vesssel in King Louis XIV's fleet — which lay untouched and unexplored on the ocean bottom since it sank in 1664. But the wreck's first nonaquatic visitor in centuries wasn't human — it was a robot.

Dubbed "OceanOne," the bright orange diving robot resembles a mecha-mermaid. It measures about 5 feet (1.5 meters) in length and has a partly human form: a torso, a head — with stereoscopic vision — and articulated arms. Its lower section holds its computer "brain," a power supply, and an array of eight multidirectional thrusters.

Guided by a computer scientist from a boat, using a set of joysticks, OceanOne combined artificial intelligence, sensory feedback and dexterous mechanical construction to perform delicate tasks underwater, such as retrieving a fragile artifact from the wreckage and placing it in a box so it could be brought to the surface. [In Images: A 'Robo-Mermaid' Embarks on Its Maiden Dive]

Remotely operated vehicles (ROV) are commonly used in ocean exploration. But OceanOne's creators designed a new kind of diving robot that can not only investigate parts of the ocean that are less accessible to people, but can do so with the flexibility and dexterity of a human diver.

The engineers also created an interface that allows a person to not only control the robot, but to actually "feel" what the robot is touching, using force sensors and haptic feedback in OceanOne's articulated hands.

"The intent here is to have a human diving virtually," said Oussama Khatib, who piloted OceanOne on its La Lune visit. Khatib, a professor of computer science at Stanford University in California, explained in a statement that the experience of guiding the robot is almost like being the diver.

“You can feel exactly what the robot is doing,” Khatib said.

OceanOne is also capable of interpreting and responding to its environment autonomously, detecting whether its hands-on work requires a lighter touch and when it needs to adjust its momentum to stay in place or change direction.

The team behind OceanOne conceived of the robot as a means for studying Red Sea coral reefs at depths that were inaccessible to a human diver. OceanOne's flexible digits would allow it to conduct underwater research — manipulated by a scientist on the surface — without damaging the reef or its inhabitants.

Rise of the machines

While we may not have quite reached the point where robots that resemble people are on every street corner, OceanOne isn't the only humanoid robot in town.

Recent videos of Atlas demonstrated that the robot could keep its balance over uneven surfaces, navigate around trees, and even recover after it had been pushed.

And another bipedal bot designed to detect and put out fires may soon help Navy firefighters extinguish blazes at sea. The Shipboard Autonomous Firefighting Robot (SAFFiR) is 5 feet 10 inches (1.8 meters) tall and weighs about 140 lbs. (64 kilograms). It can withstand exposure to smoke and heat and is capable of wielding a hose with its mechanical "hands."

For now, these groundbreaking robots — including OceanOne — are still one-of-a-kind protoypes. But OceanOne's engineers are eager to build more of these mechanical divers, in order to test their prototype's ability to work as part of a team of diving units.

Robotic divers would be a promising alternative for tackling underwater environments that might be too dangerous for humans, but the sensitivity of the computer interface would still allow a human "presence" during the dive that can't be achieved with traditional submersibles. The robots' manual dexterity would also enable these machines to perform tasks that formerly only people could carry out.

"The two bring together an amazing synergy," Khatib said in a statement. "The human and robot can do things in areas too dangerous for a human, while the human is still there."