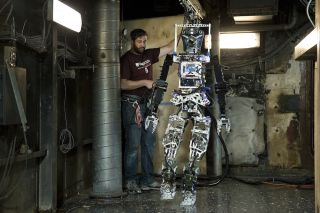 Hose-wielding humanoid robots could one day keep Navy firefighters out of harm's way.

A prototype of an adult-size firefighting bot was unveiled this week at the Naval Future Force Science and Technology Expo in Washington, D.C. Sponsored by the U.S. Office of Naval Research, the exposition was the perfect place to show off a futuristic robot equipped to fight fires at sea.

The bot's name is SAFFiR — short for Shipboard Autonomous Firefighting Robot. Standing on two "legs," SAFFiR is about the size of an adult man, measuring 5 feet 10 inches (1.8 meters) tall and weighing about 140 lbs. (64 kilograms). [The 6 Strangest Robots Ever Created]

The robot has three ways of seeing the world: a stereo camera with two lenses that allow it to see with binocular vision (like a human), a thermal imaging camera that enables it to detect heat and see through smoke, and a laser range finder that allows it to map out the distance between itself and an object. Dexterous enough to hold a fire hose, SAFFiR can both detect and put out a blaze.

Engineering students from the Terrestrial Robotics Engineering and Controls Lab and the Extreme Environments, Robotics & Materials Laboratory at Virginia Tech created the firefighting bot as part of a Navy initiative aimed at helping sailors fight fires at sea. The bot could one day be used to carry out safety inspections aboard a ship, patrol for fires and control fire damage if it detects a blaze.

In the future, every Navy ship that leaves port could have one of these firefighting robots on board, the researchers said.

SAFFiR was tested several times before being unveiled to the world this week. In November 2014, the life-size robot carried out a three-day demonstration aboard the USS Shadwell, a decommissioned Navy warship currently anchored off the coast of Mobile, Alabama.

During the demo, SAFFiR was tasked with maneuvering along a slim, low-ceilinged hallway to locate the source of a fire. Without falling or stopping, the robot then had to grasp a fire hose and blast the flames with water. The bot, which was controlled from a distance by a team from Virginia Tech, successfully put out the blaze.

"We have demonstrated a real-world application for humanoid robots that no one has done before," said John Seminatore, a master's student in mechanical engineering at Virginia Tech who helped create SAFFiR. "Manipulating an empty hose or walking down a hallway is very different than operating in a heat-warped, soot-filled corridor, dragging a hose filled with water."

Prior to the November demo, the engineering students who worked on SAFFiR spent hours aboard the USS Shadwell, preparing the ship for the robot's test. Hundreds more hours were spent testing the bot in a lab.

Eventually, the Virginia Tech team hopes to get its humanoid bot to act autonomously, but for now, it will continue to be tested as a user-operated machine. Even if the bot does one day become autonomous, it will still be necessary for SAFFiR to take remote instruction from sailors and firefighters, the researchers said.

"These robots can work closely with human firefighters without firefighters being directly exposed to steam or heat, fire and smoke," Thomas McKenna, a program manager with the Office of Naval Research, said at the demo in November. Robots may one day patrol ships, scanning for unnatural heat, smoke or other issues, and providing a "constant watch" for onboard dangers that sailors may not be able to detect, he said.