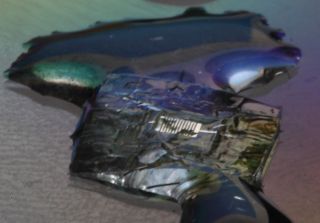 DARPA is developing electronics that can dissolve on command to prevent them falling into enemy hands.
(Image: © DARPA)

ARLINGTON, Va. — Electronics that dissolve on the battlefield and tiny, hummingbird-size drones that perform aerial reconnaissance are just a few of the sophisticated technologies the U.S. military is developing these days.

The Defense Advanced Research Projects Agency (DARPA) showcased some of its latest inventions at a microsystems technology expo here Friday (July 18), offering a glimpse of the future of warfare in the information age.

Here are some of DARPA's most intriguing projects.

Electronics are becoming increasingly cheap and easy to deploy for remote sensing or communications on the battlefield. But keeping track of, and retrieving, every device from the field is virtually impossible, DARPA officials said. [Humanoid Robots to Flying Cars: 10 Coolest DARPA Projects]

To get around this problem, DARPA is developing electronics called vanishing programmable resources (VAPR) that can disintegrate on command. These devices could be used in sensors indoors or outside, in environmental monitoring, or for diagnosis and treatments inside the human body. They would offer performance on par with commercial, off-the-shelf electronics, but could be programmed to dissolve if they fell into enemy hands or were no longer needed, agency officials said.

Seeing at night is a critical capability for many soldiers, but current systems rely on expensive and bulky night-vision goggles. Now, researchers are developing a low-cost, heat-sensitive camera for cellphones that every soldier could carry in his or her pocket.

Called the "stacked modular architecture high-resolution thermal" (SMART) chip camera, it consists of a tiny camera that is sensitive to infrared wavelengths, which are normally invisible to the human eye. The camera renders heat sources such as human bodies visible at night. With a resolution of 640 by 480 pixels, the device can fit inside a typical smartphone and costs less than $500.

For some time, DARPA has been working to develop tiny drones that could provide soldiers aerial views of the enemy from a safe distance.

First deployed in 2005, the Wasp micro air vehicle weighs only half a pound (0.2 kilograms) and has a 14-inch (36 centimeters) wingspan. The hovering spy can "loiter" in the air for more than an hour, and can fly at speeds of up to 35 mph (56 km/h), providing real-time imagery without being obtrusive. The military has since developed other small drones, including the Hummingbird, announced in 2011, which weighs less than a AA battery and resembles its namesake in both form and function.

The U.S. military uses global positioning systems (GPS) to gather information about location, direction and timing for guidance and navigation. But GPS doesn't work inside buildings, and the system can be easily compromised, DARPA officials said.

Now, a team of researchers from Carnegie Mellon University, in Pittsburgh, is developing a GPS-free positioning system that keeps track of soldiers via their boot steps. Known as micro-inertial navigation technology (MINT), the system consists of miniature radar and inertial measurement sensors strapped to a wearer's boots that relay the individual's position to commanders.

The system could be used underground, inside buildings or in densely forested environments, researchers said.