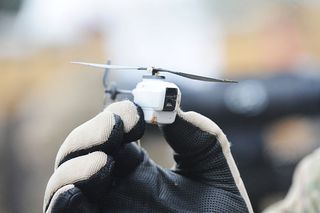 The Black Hornet nano drone, which can be carried in a soldier's pocket, has an onboard camera that gives troops video and still images of hard-to-access places.
(Image: © Richard Watt/Ministry of Defence)

Weighing only 0.56 ounces (16 grams), the Black Hornet looks like a tiny toy helicopter. But it's really a nano-size piece of military hardware unlike anything on the battlefield today — experimental robot flies and hummingbirds not withstanding.

The PD-100 Black Hornet Personal Reconnaissance System, unveiled to the American public for the first time last week at the Association of the United States Army Expo in Washington, D.C., is a drone (actually, a pair of them) that a soldier can carry and operate as easily as he or she would a radio.

Since last year, the British infantrymen in Afghanistan have been using the new Black Hornets on a variety of missions — from scouting routes for possible enemy ambushes to peeking over the walls of a nearby compound. [9 Totally Cool Uses for Drones]

The unmanned air vehicle was designed for small units that required a quick, tactical "stealth" camera in the sky, said Ole Aguirre, vice president of sales and marketing for Prox Dynamics AS, the Norwegian company that produces the Black Hornet.

Indeed, troops working with the Black Hornet say it runs silent and is invisible at more than 30 feet (10 meters). A Brigade Reconnaissance Force sergeant quoted in a U.K. Ministry of Defense announcement said the system is "very easy to operate and offers amazing capability to the guys on the ground."

A complete PD-100 kit comes with two Black Hornets, a docking station for battery recharging, a remote control unit and a mobile device with a 7-inch-wide (18 centimeters) screen to watch the camera feed — all of which is carried in a tough, waterproof case, for a total weight of almost 3 lbs. (1.3 kilograms).

Pulled out of the case and readied for action, the drone follows GPS waypoints to reach its target. Once there, it sends video and still images back to the operator. The Black Hornet can fly for 20 to 25 minutes before needing to recharge, so it's limited to traveling just three-quarters of a mile (1,200 m) in one shot.

Likewise, the Black Hornet is too small to carry a mid-wave infrared (MWIR) camera, so it's not able to do any night-spying. "The smallest MWIR sensor available on the market today is the FLIR Quark, weighing almost two times what our helicopter weighs," Aguirre said.

Still, the U.S. Army examined two Black Hornets in February as part of its Cargo Pocket Intelligence, Surveillance and Reconnaissance (CPISR) effort. The Army purchased two, but what that means program-wise, they declined to say.

According to Flightglobal, the British military has amassed 324 Black Hornets in its unmanned aerial vehicle arsenal.

Plotting its next development step, Prox Dynamics is seeking to add new sensors and overcome many of the challenges its drone currently faces. "We like keeping our engineers busy," Aguirre said.

Editor's Note: This article has been updated to correct a metric weight conversion.