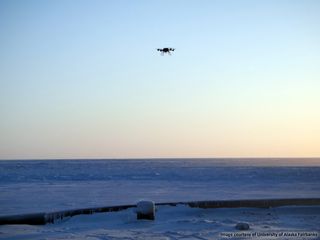 Small drones may soon take to the skies above Earth's top with the aim of making survival there easier for both humans and wild animals. Such unmanned aircraft flown represent the first in a coming wave of Arctic drones that could watch out for oil spills, track ice floes and migrating whales, or help the U.S. Coast Guard in search and rescue operations.

The Federal Aviation Administration (FAA) recently gave its first restricted approval for two commercial drone operations in the Arctic — a first step toward routine use of drones by companies aiming to monitor rich fisheries, expand oil-drilling operations and send more shipping across the increasingly ice-free summer waters of the Arctic Ocean. But several companies had already partnered with the University of Alaska Fairbanks to conduct experimental tests of drones in Alaska under FAA waivers or certificates of authorization.

"We've done work for oil companies, but it's also research because they and we are trying to figure out if unmanned aircraft are effective and good for the job," said Ro Bailey, deputy director of the Alaska Center for Unmanned Aircraft Systems Integration at the University of Alaska Fairbanks. [9 Totally Cool Uses for Drones]

Such work can benefit scientists and Alaskan citizens as well as oil companies. Unmanned aircraft operated by the University of Alaska Fairbanks have helped check out oil pipelines for energy giant BP, counted Stellar sea lions in the Aleutian Islands, and guided a Russian fuel tanker to deliver emergency supplies to Nome, Alaska.

Human interest in the Arctic has skyrocketed as the melting ice opens up new opportunities for energy exploration and shipping. Small drones weighing less than 55 lbs. (25 kilograms) offer the promise of both helping and monitoring such commercial activities in the territories once ruled by polar bears, sea lions and whales — all while keeping an eye out to prevent unhappy encounters between humans and wildlife.

An unmanned Aeryon Scout drone flown by the University of Alaska Fairbanks stayed on the lookout for polar bears during a fuel resupply mission to Nome in January 2012. The small drone (on loan from BP Alaska) also helped monitor ice conditions as the Russian fuel tanker Renda and the U.S. Coast Guard icebreaker Healy made their way into Nome's harbor. [How Unmanned Drone Aircraft Work (Infographic)]

"We helped lay out the path for the fuel hose from the fuel tanker to the storage tanks, and we did some monitoring to help humans wandering around to not encounter polar bears," Bailey told LiveScience. "A polar bear encounter is not good for the humans, as you might guess."

Drones may also help oil companies to watch out for wildlife movements when planning where to drill for oil or lay out pipelines. In a worst-case scenario, drones could spot mammals or birds affected by oil spills and help out cleanup efforts by keeping an eye on the oil spills themselves.

The two recent FAA approvals for commercial operations have focused on this type of work. Conoco Phillips plans to use an Insitu ScanEagle drone to survey ice floes and migrating whales in Arctic oil exploration regions off the Alaska coast this summer. Similarly, an AeroVironment Puma drone received the go-ahead to help emergency responders monitor oil spills and wildlife over the Beaufort Sea just north of Alaska.

Small drones have proven surprisingly tough in the face of the harsh Arctic climate. The extreme cold temperatures reduce the battery life of drones and cut down on flying times, but Bailey said the unmanned aircraft tested by the University of Alaska Fairbanks have performed well overall. The university has even helped engineer improvements for some drones and the instruments they carry.

"In our experience, the unmanned aircraft work fine in temperatures 30 [degrees F] below," Bailey said. "We have more problems with our laptops, because laptops don't like the cold at all."

The sturdiness comes in handy for studying the natural hazards found in the Arctic environment. Drones can help spot the heat signatures of wounded people trapped in collapsed buildings in the aftermath of an earthquake, or map the borders of Alaskan wildfires with infrared vision. They can also evaluate the risk of avalanches or monitor glacier lakes capable of unleashing sudden floods.

Such drone activities may become even more frequent if the FAA can eventually finalize the rules for type-certified unmanned aircraft — a certification of safety and airworthiness that would allow anyone to buy and operate the certified drones without special waivers or certificates. (Pilot licenses would still be a separate issue.)

The FAA is also looking to create permanent airspace corridors for drone operations in the Arctic, as charged by Congress through the FAA Modernization and Reform Act of 2012. Those corridors would be open to drone flights for research, commercial or government purposes.

The University of Alaska Fairbanks has submitted an application to become one of six new FAA test sites for drones chosen at the end of this year. University researchers expect the demand for small drone operations to only rise whenever drones can finally fly with less regulatory hurdles.

"We are already tapped with more work than we can handle," Bailey said. "Once the rules are established, they'll cut down on paperwork, but won't cut down on work."