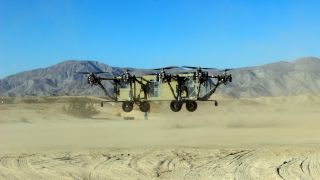 It's always risky to send pilots on reconnaissance missions or into combat zones, so to protect its troops, the U.S. military is turning to technological solutions.

Unmanned aerial vehicles, or drones, are piloted remotely by trained personnel. These robotic flying machines are already widely used across all branches of the military, but some of the most cutting-edge applications are still in the works.

Here are some of the most intriguing drone projects that are taking off.

The U.S. Army is overhauling its famed Black Hawk helicopter, making it capable of flying without a human on board. The Optionally Piloted Black Hawk (OPBH) Demonstrator successfully finished its first test flight March 11. The pilotless helicopter was able to hover by itself, and ground controllers tested other crucial functions midflight. The helicopter drones could one day be used to deliver cargo, weapons or other supplies to troops. [7 Technologies That Transformed Warfare]

If a wounded soldier needs a lift to the hospital, a new, unmanned helicopter-truck hybrid from Advanced Tactics, Inc. may be able to do that autonomously. The Black Knight Transformer, a so-called "multicopter," is designed to land near combat zones (but away from heavy fighting) and then drive toward the injured soldier for others to load him or her into the vehicle.

The vehicle's rugged construction would also allow it to deliver cargo to remote areas, even in spots that are hard for conventional cars and trucks to reach, company officials said. Advanced Tactics is now developing a "large-scale prototype demonstrator" that will be able to take off and land vertically, and also have the flexibility to drive.

The Defense Advanced Research Projects Agency (DARPA) is also interested in developing vehicles that can take off and land vertically, as part of its VTOL X-Plane project. If it performs up to expectations, the VTOL X-Plane would approximately double the current top speed of helicopters, at between 172 to 196 miles per hour (278 to 315 kilometers per hour).

"Faster VTOL aircraft could shorten mission times and increase the potential for successful operations, while reducing vulnerability to enemy attack," DARPA officials said in a statement.

Funding for the first phase of the VTOL X-Plane project was awarded in March to Aurora Flight Sciences Co.,

The Boeing Co., Karem Aircraft Inc. and Sikorsky Aircraft Corp. Preliminary vehicle designs are due in 2015, with initial testing set to begin in 2017 or 2018, according to DARPA.

Access to quick transportation is essential at military bases, but there are rarely enough helicopters on hand to meet the needs of troops in the field, military officials have said. DARPA's Aerial Reconfigurable Embedded System (ARES) could help the military to get around that problem.

The ARES project is being led by Skunk Works, Lockheed Martin Corp.'s advanced research program based in California. The vehicle is designed to land in a spot half the size of what a helicopter usually needs, making it easier to touch down on rugged terrain or on carrier ships. Tilting duct fans on the aircraft will enable it to easily switch between hovering to high-speed cruising, and the body of the aircraft will have the capacity to carry cargo and supplies, company officials said.

The project is now in its third and final phase, DARPA officials said in a statement earlier this year, but it is not publicly known when units will be ready to enter combat.