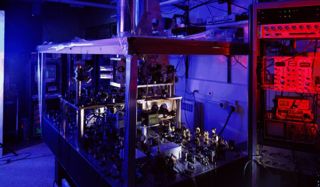 NIST-F1, the nation's primary time and frequency standard, is among the most accurate clocks in the world.
(Image: © NIST)

Timekeeping can be as simple as counting "one Mississippi, two Mississippi . . ." prior to blitzing in backyard football, or tracking the back-and-forth swings of a pendulum in a grandfather clock.

In both cases, the trick is counting the intervals of something that occurs repeatedly with as little variation as possible. A pendulum swing, say, or a 'Mississippi' just about equates to a second, the unit of timekeeping that as we know comprises minutes and hours.

But even the best mechanical pendulums and quartz crystal-based clocks develop discrepancies. Far better for timekeeping is the natural and exact "vibration" in an energized atom.

When exposed to certain frequencies of radiation, such as radio waves, the subatomic particles called electrons that orbit an atom's nucleus will "jump" back and forth between energy states. Clocks based on this jumping within atoms can therefore provide an extremely precise way to count seconds.

It is no surprise then that the international standard for the length of one second is based on atoms. Since 1967, the official definition of a second is 9,192,631,770 cycles of the radiation that gets an atom of the element called cesium to vibrate between two energy states.

Inside a cesium atomic clock, cesium atoms are funneled down a tube where they pass through radio waves . If this frequency is just right 9,192,631,770 cycles per second then the cesium atoms "resonate" and change their energy state.

A detector at the end of the tube keeps track of the number of cesium atoms reaching it that have changed their energy states. The more finely tuned the radio wave frequency is to 9,192,631,770 cycles per second, the more cesium atoms reach the detector.

The detector feeds information back into the radio wave generator. It synchronizes the frequency of the radio waves with the peak number of cesium atoms striking it. Other electronics in the atomic clock count this frequency. As with a single swing of the pendulum, a second is ticked off when the frequency count is met.

The first quality atomic clocks made in the 1950s were based on cesium, and such clocks honed to greater precisions over the decades remain the basis used to keep official time throughout the world.

In the United States, the top clocks are maintained by the National Institutes of Standards and Technology (NIST) in Boulder, Colo., and the United States Naval Observatory (USNO) in Washington, D.C.

The NIST-F1 cesium atomic clock can produce a frequency so precise that its time error per day is about 0.03 nanoseconds, which means that the clock would lose one second in 100 million years.

Super-accurate timekeeping is integral to many elements of modern life, such as high-speed electronic communications, electrical grids and the Global Positioning System (GPS) and of course knowing when your favorite television show comes on.