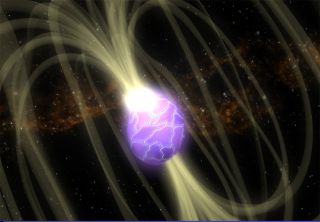 In this image, a highly-magnetized neutron star undergoes a "starquake", a violent seismic rearrangement of the neutron star's crust, creating a explosion of gamma-rays which can easily be seen from across the galaxy.
(Image: © NASA)

Editor's Note: ScienceLives is an occasional series that puts scientists under the microscope to find out what makes them tick. The series is a cooperation between the National Science Foundation and LiveScience.

Not all scientific discoveries are made in the lab. For astrophysicists, stars are subjects best viewed from afar, or in the case of devastating starquakes, from the safety of a computer simulation. Andrew Steiner of the Michigan State University National Superconducting Cyclotron Lab — a national user facility for experimental nuclear science supported by NSF—spends his days figuring out what causes the strange behavior of earthquake-like phenomena on the surface of neutron stars by comparing high-level mathematical and computer simulations to star observations. For more about his work, see the Behind the Scenes feature "Shockwave of X-Ray Starquake Enthralls Scientists," and for more on Steiner, see his responses to the 10 questions below.

What inspired you to choose this field of study? A combination of several things. As a child, I first discovered an interest in astrophysics through Carl Sagan's television show “Cosmos” and the related books. As I was growing up, I found I enjoyed mathematics as well, and I am in my current position largely because of these early experiences.

What is the best piece of advice you ever received? If you have to ask for respect, you've already lost it. The only way to gain respect in physics is to do good work.

What was your first scientific experiment as a child? I did a small experiment for a science fair on the acidity of snowfall in the region surrounding my hometown, Fort Collins, Colorado.

What is the most important characteristic a scientist must demonstrate in order to be an effective scientist? A healthy measure of skepticism is required to test every idea to see if it matches the observed data. Also, a measure of creativity is required to generate new ideas.

What are the societal benefits of your research? Basic research, research with no clear and immediate industrial applications, benefits society by contributing to our scientific knowledge about how the world works. All of the technological advances of the present day depend on scientific knowledge that was obtained previously, and a significant part of that scientific knowledge came from basic research. The exciting part about what I do is that neutron stars, even though they are very far away, are beginning to give us important information about how neutrons and protons on Earth interact.

What about your field or being a scientist do you think would surprise people the most? I'm a theoretical physicist and since I don't have a laboratory, people are generally surprised about how my day works. My day consists primarily of generating mathematical and computer-based models of neutron stars. The remaining parts of my day consist primarily of communication: collaborating with colleagues, disseminating my results to the community, and reading about the results of other researchers in my field.

If you could only rescue one thing from your burning office or lab, what would it be? My computer, mostly for the simple fact that it is the most valuable thing in my office.

What music do you play most often in your lab or car? A little bit of many things, but not everything of any one genre: progressive and hard rock, techno, ambient house, and trip-hop.