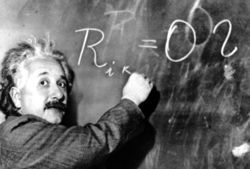 Albert Einstein was mind-bogglingly smart. His brain, no bigger than an average man's, somehow worked better, making unprecedented mental leaps between space and time and ultimately linking them together to form spacetime, a strange and (to most people) almost inconceivable entity. Einstein's brain saw the universe and got it.

Why can't we all be that smart?

"You have two separate lines of research converging for the first time to suggest an answer," said Edward Bullmore, a neuroscientist at Cambridge University in England. He is currently writing a review article on all the related research, which indicates the following: "Brains have evolved not just to minimize cost, and not just to become as intelligent as possible, but to reach a balance between those things."

Bullmore uses brain-imaging techniques to look at how much energy the functioning brain uses. Brains are extremely expensive, energy-wise, he noted: Though they take up only 2 percent of our body mass, they burn 20 percent of our energy. [Read: Inside the Brain: A Journey Through Time]

In another line of research, neurobiologist Simon Laughlin, also at Cambridge but working independently of Bullmore, has drawn from examples in biology to show that a great deal of evolution goes into adjusting the brain's design to make it cheaper to run.

Among the adjustments is one of size: For a given species, a smaller brain costs less energy.

That explains why our brains haven't ballooned over the millennia. But it doesn't explain why we can't do more with the mental goods we have — why we can't all be like Einstein, whose brain wasn't huge, just high-functioning. (Einstein apparently never took an IQ test, but scientists estimate his score would've been about 160, or higher than 99.9 percent of the population.)

So why do most of our brains seem, by comparison, like mush? [Read: Why We Zone Out]

"Neuroimaging data shows that individuals with highly efficient [neural] networks have a higher IQ," Bullmore told Life's Little Mysteries, a sister site to LiveScience. "Work that I and others have done shows that it's precisely the connections that confer high IQ that will be most expensive."

As it turns out, mental leaps are literally just that: long-range jumps between disparate brain regions. "For the intelligent aspects of cognitive processing — thinking hard — the network that we need in the brain is highly distributed over space," Bullmore said. "Consciously performing some difficult model task … relies on connections forming over long anatomical distances."

As with other people possessing high IQs, Einstein's brain is likely to have been highly integrated, with many paths connecting distant regions. Navigating those long and winding paths required a huge amount of energy, however — so much that the average person's brain simply doesn't build many such paths.

"The basic idea is that the [average] human brain represents some kind of trade-off between minimizing cost and maximizing efficiency," Bullmore said.