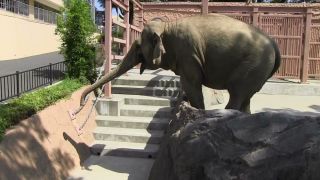 Researchers found that elephants blow air through their trunks to grasp food that is out of reach.
(Image: © Kaori Mizuno)

Elephants can blow air through their trunks to help them grab food that is hard to reach, according to a recent study.

The animals are widely known as some of the most intelligent mammals on Earth, and the new findings strengthen a hypothesis proposed by Charles Darwin: that elephants are "tool users" because they can use their trunks to manipulate their breath and help grasp hard-to-reach food.

Scientists observed two captive female Asian elephants, Mineko and Suzuko, at Kamine Zoo in Japan. The researchers saw that when pieces of food were too far away for the elephants to grab with their trunks, the animals would blast air to bring the treats closer. The researchers predicted that the further away a piece of apple was, for example, the more frequently the elephants would blow air at it. [The 5 Smartest Non-Primates on the Planet]

To test their theory, researchers at Kyoto University and The Graduate University for Advanced Studies (SOKENDAI), both in Japan, mapped out a digital grid of the elephants' enclosure and placed pieces of food — such as apples, hay, leaves, potatoes and bamboo — in different locations.

The scientists then filmed the elephants over 32 days, split into 128 trials, and tracked the movement of the food pieces across the grid. A trial began when the elephants started blowing at a piece of food, and finished when the animals were successful in retrieving the food or gave up trying to reach their prize.

The team analyzed the frequency and duration of the blowing, the animals' trunk positions, and how often the elephants successfully got the food. Results showed that, on average, it took three blasts of air to reach faraway food, and the elephants were less likely to blow air from their trunks when food was easy to reach.

In general, the researchers found that the dominant female, Mineko, was more skilled at this behavior than was Suzuko, and Mineko also seemed to be better at targeting the air at a specific point to push food in the right direction. Lead study researcher Kaori Mizuno, of the Wildlife Research Center of Kyoto University and the Graduate University for Advanced Studies,said Mineko is probably the more intelligent animal, as she altered her blowing speed in trials, whereas Suzuko did not.

"Mineko drove food forward in all cases. [She] held her trunk tip over the food and kept blowing at the far side of the food," Mizuno told Live Science. "This suggests that she was aware of the physical consequence of blowing on the far side, knowing that it was an efficient way to drive the food towards her." [Creative Creatures: 10 Animals That Use Tools]

The researchers said the elephants' blowing technique could be comparable to using tools, such as chimpanzees' use of sticks to catch ants, and otters' use of stones to smash open mollusks.

This isn't the first time elephants have been observed using tools. In 1993, a study published in the journal Animal Behavior showed that African and Asian elephants grasp branches in their trunks and flail the branches around their bodies to swat away flies.

This type of tool use shows an animal's ability to understand what it is doing on a level beyond just positive reinforcement through rewards, according to the 1993 study. By using a tool such as sticks in the earlier research or blowing in Mizuno’s study, animals show they understand the effect of the object's use, and provide a solution to a problem, which demonstrates an advanced way of thinking, Mizuno said.

"[The elephants] used their blowing for achieving a goal," Mizuno said. "Additionally, we can say that they understood causal reasoning."

Mizuno said this research cannot conclude definitively that blowing is a "tool," but it opens up a new way of defining what a tool actually is.

The researchers said they were unsure whether the elephants learned the behavior from each other, but said it's a possibility because the animals live near one another. Elephants typically learn behaviors from their family as they grow up, like humans do, and this education period can last about 10 years, according to Joyce Poole in her book "Coming of Age with Elephants: A Memoir" (Hyperion, 1997).

"We think that one learned from the other, because two cohabiting elephants show the same behavior," Mizuno said.

The study demonstrates that elephants may have an advanced understanding of their physical environment, and the researchers now have the opportunity to expand the definition of a "tool" to include other behaviors, such as the elephants' trunk use.

The findings were published online in the journal Animal Cognition in November 2015.