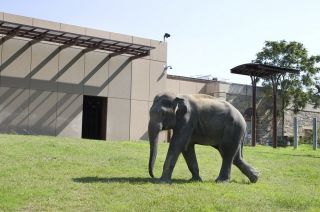 Kandula, an 7-year-old elephant that the Smithsonian's National Zoo, has remarkable problem- solving skills. He can use boxes and stepping stools to reach food that was previously out of reach.
(Image: © Smithsonian National Zoo)

A 7-year-old Asian elephant named Kandula at the Smithsonian National Zoo wowed his keepers when he devised a strategy to use a large plastic cube to obtain out-of-reach food.

And when the cube wasn't around, Kandula found other means, including using a tire and stacking multiple, smaller objects, to reach toward the food. [Elephant Images: The Biggest Beasts on Land]

The researchers said he seems to have thought out the strategy all on his own, making Kandula one smart elephant. What sets this apart from regular tool use is that the solution comes to the animal without any trial and error, as if he can conceptualize the problem and its solution.

This aha moment — the split second spark of genius resulting in the sudden arrival of a solution to a problem — is a common human experience. It's even seen throughout the animal kingdom; chimpanzees and baboons do it, as do rooks and a parrot species called the kea.

While elephants are thought of as relatively intelligent animals, they haven't been observed exhibiting this type of spontaneous problem-solving until now.

Out of the Washington, D.C., zoo's three elephants, the other two being 36-year-old Shanthi and 63-year-old Ambika, Kandula was the only one who figured out how to use the cube as a tool. Interestingly, his mother, Shanthi, had been observed standing on objects to reach for items several times in her adolescence, though the idea wasn't identified as spontaneous and she hasn't performed the task since.

Kandula caught onto the idea during his seventh session in his enclosure with the cube and the unreachable branch; the juvenile elephant began using the cube as a step stool to investigate areas of his enclosure and to reach for blossoms on an overhanging tree branch. [10 Animals That Use Tools]

Kandula has never been taught to move large objects in that way or to stand on objects to reach for things, though he had had experience with the cube as a plaything in his enclosure and he had been taught to stand on an aluminum tub when the researchers were examining him.

The scientists also found that Kandula searched for and retrieved the cube from different, hidden areas of the yard, and then used it to reach the food.

All of the elephants failed the first two problem-solving tasks the researchers threw at them, which made use of a stick as a tool to reach fruit outside of their cage. These previous efforts may have been hindered because the stick would have to be grasped by the elephant's trunk, hindering the animals' ability to smell the food reward.

"Whether the behavior described herein is truly 'insightful' is, of course, a point for discussion," the authors write in yesterday's (Aug. 18) issue of the online journal PLoS ONE. "Although the specific cognitive processes underlying the precipitousness of Kandula's behavior remain in question, this study demonstrates that elephants are capable of insightful problem-solving."

They conclude: "When given the proper circumstances, elephants, like humans and several other species, can demonstrate 'aha' moments."