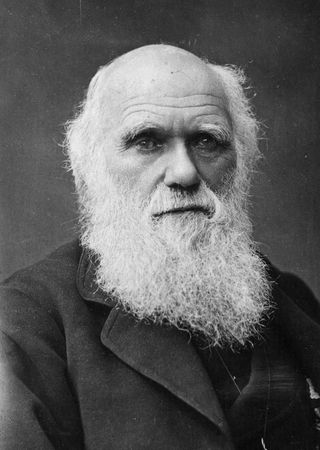 This is one of the last photographs taken of Charles Darwin, who developed the theory of evolution whereby changes in species are driven, over time, by natural and sexual selection.
(Image: © Richard Milner Archive)

NEW YORK — How much did Charles Darwin's personal anxieties influence his work on the theory of evolution? Did the tragedy of losing his mother at an early age shape the type of scientist he would  become?

Dr. Gail Saltz, an associate professor of psychiatry at the New York Presbyterian Hospital Weill-Cornell School of Medicine, and David Kohn, founder and director of the Darwin Manuscripts Project at the American Museum of Natural History, discussed these and other intimately personal questions about Darwin on Monday (March 3) here at the 92nd Street Y in Manhattan.

The speakers examined the so-called psychobiography of Darwin, which involves using modern psychological research and theory to peel back the mystique of historical figures, in an effort to better understand their lives. Through the lens of psychology, Saltz and Kohn tried to figure out the motives that governed Darwin's actions and the issues that drove his ambitions. [See Images of Charles Darwin's Life on Display]

Darwin is best known for his work on the theory of evolution, which he detailed in his seminal book, "On the Origin of Species." The book, published in 1859, stated that all life on Earth descended over time from common ancestors, and a process of natural selection governs the branching pattern of biological changes.

Darwin's contributions helped him become one of the most influential scientists in history, but his theory of evolution by natural selection remains controversial to this day. Biblical literalists reject Darwin's theory, believing instead in creationism, which focuses on the idea that God created animals and humans in their current form some 6,000 years ago, as described in Genesis.

Yet, Darwin's experiences early in his life may have taught him how to protect against the onslaught of criticism that would be lobbed his way from people championing competing theories, according to Saltz.

Darwin was born into a wealthy family on Feb. 12, 1809. But tragedy struck early, and Darwin's mother died when the boy was just 8 years old. His older sisters became the maternal figures.

"His sisters were like mothers to him, and they were very critical," Saltz said. "He learned to protect himself from criticism, and maybe learned to develop a sense of oppositional defiance, which becomes prophetic."

Darwin's father, Robert, was a doctor, and was very strict with his son, the researchers said. Robert had aspirations for his son to follow in his footsteps, but Charles felt indifferent about medicine, Kohn said. [Creative Genius: The World's Greatest Minds]

"He liked observing his father practice, but when he went to [the University of] Edinburgh Medical School, other things drew him in," he said.

Yet, despite going on to pursue his interest in natural science, Darwin maintained a strong desire to please his father, and Robert Darwin's death in 1848 would have a profound effect on the naturalist, Saltz said.

On his own origin

Another key to unraveling Darwin's psychobiography involves analyzing the scientist's internal anxiety, Saltz said. Before embarking on his five-year voyage aboard the HMS Beagle — during which time he would begin to develop his theory of evolution — Darwin experienced anxiety attacks, headaches and eczema-type skin irritations, she added.

"Historians have looked at this and think it's very psychosomatic," Saltz said, referring to the idea that Darwin's physical ailments may have been accompanied — or even aggravated — by mental suffering brought on by stress and anxiety.

Darwin's anxiety persisted throughout his life, and culminated in what might be diagnosed as a nervous breakdown shortly after the death of his father, according to Saltz.

"He wanted his father's approval so much, and this remained to the end of his father's life," she said. "After his father's death, Charles goes through a period where he's really not well."

These troubles may explain why nearly 21 years passed between when Darwin began writing his theory of evolution, and when "On the Origin of Species" was finally published in 1859, Saltz added.

"He holds back in publishing, and waits decades," Saltz said. "There was a long period when he had these ideas, had written these ideas, but didn't publish them. Sometimes we see that production is blocked when patients are depressed."

Yet, despite suffering bouts of anxiety and having to navigate around critical family members, Darwin's upbringing likely also shaped his unique scientific talents, the researchers said.

"He was remarkably vigilant as an observer," Saltz said. "This may have been honed by having a father who was highly critical. All of this may have translated into him being a great observer of nature."