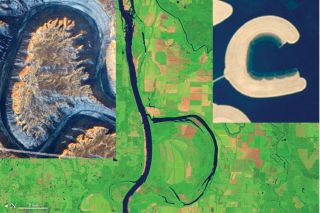 Sometimes, looking at satellite images of planet Earth is a bit like playing hidden pictures.

A few years ago, NASA science writer Adam Voiland noticed that a satellite image of smoke plumes over Canada looked like the letter "V." Eager to play a worldwide game of hidden pictures, he began compiling images of all 26 letters in the English alphabet found in photos taken by NASA satellites and astronauts, he said in NASA Earth Observatory post.

Now, Voiland has a collection of natural wonders, including clouds, phytoplankton blooms and dust clouds, that look like the ABCs. The assemblage is a work in progress; he encourages anyone who can find a better letter, be it cursive or script, to contact NASA with the date, latitude and longitude. (Image credits: NASA) [Photos: Stunning Views of US National Parks from Space]

Bowknot Bend, a portion of Utah's Green River doubling back on itself, looks like a lowercase, cursive "A." Rafters journeying on the Green River will travel about 9 miles (14.5 kilometers) around the loop before coming back to nearly the same spot. An astronaut on the International Space Station took this photo on Jan. 22, 2014.

The letter "B" comes into view in this image of the Arkansas River and the Holla Bend Wildlife Refuge. During wintertime, as many as 100,000 ducks and geese take shelter in the refuge, Voiland said. The Operational Land Imager (OLI) on Landsat 8 took this image on Aug. 4, 2014.

Can you see the "C"? These man-made tropical islands are located at the southern end of Bahrain Island off of the Persian Gulf. An astronaut snapped this photo on Jan. 23, 2011.

Don't blink, or you might miss this uppercase, outlined "D" in an image of Akimiski Island, located in Canada's James Bay. The Enhanced Thematic Mapper on Landsat 7 captured this image on Aug. 9, 2000.

This swirly, lowercase "E" is actually a phytoplankton bloom off the east coast of New Zealand. The Moderate Resolution Imaging Spectroradiometer (MODIS) on NASA's Aqua satellite acquired this image on Oct. 25, 2009.

Fly to Tibet to see the letter "F." This false-color image shows the valleys and snow-topped mountain ranges in southeastern Tibet. Fittingly, "F" helps spell the word "firn," a granular kind of snow that is found on the top of glaciers before it is compressed into ice.

This uppercase G is actually Pinaki Island, a 1.8-mile by 1.2-mile island (3 by 2 km) located in the Pacific Ocean's French Polynesia. Astronauts aboard the International Space Station took the photo in April 2001.

Hop on over to southwestern Kyrgyzstan to see rivers running through these colorful ridges. The OLI on Landsat 8 took this image on Aug. 30, 2014.

Always remember to dot your i's. The lowercase "I" seen here captures the beauty of the Andaman Islands in the Bay of Bengal between India and Myanmar. The thin, bright rings around several of the islands are coral reefs that the 9.1-magnitude earthquake in 2004 pushed up and out of the water, Voiland said.

There's nothing jejune about this "J"-looking reef, known as the Trunk Reef and located near Townsville, Australia. The OLI on Landsat 8 took this image on July 17, 2015.

The glaciers at the Sirmilik National Park form this beautiful "K" in Pond Inlet, or Mittimatalik, Canada. The OLI on Landsat 8 took this image on Aug. 3, 2015.

Snowfall in the northeastern United States created this unique "L." The MODIS on the Aqua satellite acquired this image on Oct. 30, 2008.

This fancy "M" shows the glaciers of the Tian Shan mountains in northeastern Kyrgyzstan. The brown sediment within the upper part of the "M" is called medial moraine, which describes sediment that piles up in the middle of merging glaciers, Voiland said.

These "N"-shaped clouds aren't made by planes, but rather by ships crossing the Pacific Ocean. Called ship tracks, these clouds take shape when ships release small gas particles of exhaust. The particles waft up to the sky and trigger cloud formation.

The MODIS on the Terra satellite took this image on March 4, 2009.

A false-color image of the Mackenzie River Delta in Canada shows the letter "P." The Mackenzie River is Canada's longest river, at about 1,080 miles (1,738 km). The ASTER sensor on the Terra satellite took this image on Aug. 4, 2005.

The Lonar crater in India contains shocked quartz, a hint suggesting that a large meteorite created the crater after slamming into Earth. Shocked quartz forms when the mineral is under intense pressure.

This whirly "S" looks like one of Vincent Van Gogh's textured paintings, but is actually an image of clouds blowing over the Atlantic Ocean. The MODIS on the Terra satellite took this image on April 29, 2009.

I spy two green roads meeting at a "T" in the United Arab Emirates. The OLI on Landsat 8 took this image on March 9, 2015.

The San Juan River meanders through the sandstone at Goosenecks State Park in southeastern Utah. The image, taken by the Ikonos satellite on May 9, 2004, shows that the river is surrounded by canyon walls more than 1,000 feet (304 meters) high, according to NASA Earth Observatory.

Ash makes the letter "V" as it covers the snow on Shiveluch, one of Russia's largest and most active volcanoes. The OLI on Landsat 8 took this image on March 23, 2015.

This cursive "W" is actually dust blowing high above the Red Sea in the Middle East. The MODIS on NASA's Terra satellite captured this image on Jan. 13, 2009.

"X" marks the spot in this false-color image of the northwest corner of the Leidy Glacier in Greenland. The ASTER on NASA's Terra satellite took this image on Aug. 7, 2012.

These colorful streaks were added after the picture was taken, but nonetheless the Ugab River in Namibia still looks like a "Y." The ASTER on NASA's Terra satellite acquired this image on Dec. 25, 2000.

A wildfire over Canada produced this "Z"-like smoke pattern in July 2012. The MODIS on NASA's Aqua satellite took this image from space.