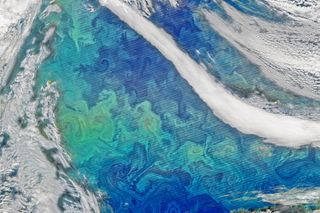 It may look like a painting by Vincent van Gogh, but this mass of swirling colors is really a satellite image depicting a huge bloom of phytoplankton, or microscopic marine plant life, in the waters of the North Atlantic Ocean.

NASA acquired the image on Sept. 23 using its Suomi NPP weather satellite. The spacecraft is equipped with a special imaging tool known as the Visible Infrared Imaging Radiometer Suite (VIIRS), which collects visible and infrared imagery.

To create this artful picture, NASA combined data from the red, green and blue infrared bands of VIIRS with additional data about the levels of chlorophyll (green pigments found in algae and plants) present in the North Atlantic Ocean. Like terrestrial plants, phytoplankton contain light-absorbing chlorophyll and need sunlight to live and grow. [Earth from Above: 101 Stunning Images from Orbit]

“The image does a beautiful job of showing the close link between ocean physics and biology,” Michael Behrenfeld, a phytoplankton ecologist at Oregon State University, said in a statement. “The features that jump out so clearly represent the influence of ocean eddies and physical stirring on the concentration of phytoplankton pigments and, possibly, colored dissolved organic matter.”

Phytoplankton blooms occur in the North Atlantic Ocean every fall, but weather patterns during this time of year typically make the blooms hard to observe via satellite, according to NASA. It's more common to collect images of this natural phenomenon in the springtime.

“A lot of what we don’t know about ocean ecology has to do with the difficulty of sampling the ocean, whether it be from a storm-tossed ship or from a cloud-obstructed satellite,” said Norman Kuring, an ocean scientist at NASA’s Goddard Space Flight Center in Greenbelt, Maryland.

Just a few weeks after this bloom's colors were recorded, researchers with NASA’s North Atlantic Aerosols and Marine Ecosystems Study (NAAMES) traveled to this stretch of ocean to take measurements using ship- and aircraft-based tools. The information they gathered will be combined with satellite and ocean sensor data to learn more about phytoplankton blooms and their effect on the environment, which can be significant, according to Rich Moore, deputy project scientist for NAAMES and a researcher at NASA’s Langley Research Center in Hampton, Virginia.

As phytoplankton bloom, they release organic molecules into the surrounding seawater. These molecules can then be lifted into the air as sea spray, Moore said in a statement.

“These biologically-driven aerosol influences have been detected as far away as coastal monitoring stations in Ireland,” Moore said. “However, we have much less information about what is going on out in middle of the ocean. NAAMES will attempt to fill this important scientific gap by studying the link between the bloom, any changes in the overlying atmospheric aerosols and how these changes may then go on to affect clouds and regional climate.”

The next NAAMES campaign will begin in May 2016, when the springtime phytoplankton bloom is in full effect, NASA said.