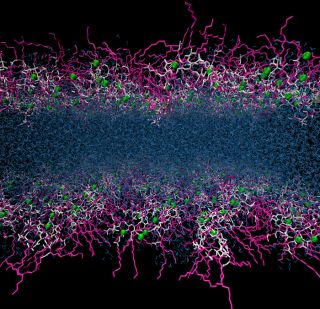 What impact does sea spray have on global climate? It's a question scientists have studied for decades. They know that sea spray aerosols can float into the atmosphere and "seed" clouds — many of which seem to help cool the Earth by reflecting light, though there are others that seem to contribute to warming. But which aerosol particles do what actions, and under what conditions? How do aerosols affect precipitation and rainfall distribution? Could better understanding sea spray actually help humanity offset climate warming?

"The single largest uncertainty in climate change is how aerosols affect clouds and climate," said atmospheric scientist Kimberly Prather of the University of California, San Diego.

The center Prather directs — the NSF Center for Aerosol Impacts on Climate and the Environment — has taken extraordinary steps to find answers. It made an ocean-atmosphere system in the Hydraulics Laboratory at Scripps Oceanography, pumping water from the Pacific ocean into a 33-meter (108-foot) long wave flume. This tank is equipped with a board "shoal" that acts as a wave break, generating sea spray.

The system allows researchers to isolate their samples and have more control over variables that affect the production, size and chemistry of sea spray (which is made up of particles of salt, dust, bacteria and even viruses). [Simulating Sea Spray to Solve Climate Mystery (Gallery )]

The lab has air filters to remove pollution, and the 3,000-gallon wave flume is fitted with a cover to encapsulate the filtered air. Prather wants to get baseline data for the chemical properties of sea spray alone.

"Scientists have gone out over the oceans on ships," she said. "We've done it ourselves about 10 times. And you go out and you try and measure what's getting out of the ocean. And it turns out there's so much other stuff in the atmosphere. You can find the human component, the pollution from humans . You can find dust. You can find sea spray. The problem is it's all mixed up. And so trying to unravel just what the ocean is doing is nearly impossible. And so in here we've evacuated the head space. The air is clean. All of these air filters are actually cleaning the air of any particles. So there is nothing except for when the wave breaks. And the goal in our experiments is to understand what is coming out of the ocean itself."

New eyes for an old problem

The NSF center Prather leads, along with co-director Vicki Grassian from the University of Iowa, brings together top scientists from nine different universities across the country to create "new eyes for a very old problem," she said. "Every time we make a measurement we are learning something new."

With its micro-ocean system, these researchers can add variables that reflect the myriad human and natural influences in the real world, and measure their impact on sea spray composition. For example, they can spike the water with nutrients or pollutants, or change the temperature.

Spiking the water with nutrients stimulates a process that can result in a phytoplankton bloom of the kind that has become increasingly common as a result of agriculture runoff.

Last year, the team released a study showing that strong concentrations of bacteria in water leads to a reduction in sea spray's ability to form clouds. Over five days, the team systematically altered the flume-water ecosystem by adding various combinations of marine bacteria and phytoplankton. The system's hydraulic paddle pushed waves to break over the artificial shoal, and instruments analyzed the chemistry of the seawater, air and aerosols.

Forming clouds, or not

The researchers found that the composition of the aerosols changed in ways that reduced their ability to form clouds. One day after they added new cultures, tests showed bacteria levels rose five-fold and cloud-seeding potential fell by about a third. At the same time, the concentration of phytoplankton fell, along with levels of the pigment chlorophyll-a. This is an important finding because of the way scientists currently measure biological activity. Instruments on satellites look for biological activity by measuring the color of the sea surface — which changes with levels of chlorophyll-a. The center's experiments show that such assessments could miss blooms of other organisms like bacteria. [How Do Clouds Form? ]

The center is also finding evidence that aerosols may redistribute rainfall. Prather's hope is that the team's findings will one day be incorporated into climate and weather forecasting models, which could help regions better anticipate and deal with problems ranging from drought to extreme storms.

"If we can figure out which aerosols are maybe warming our atmosphere, we can remove those aerosols relatively quickly — or we can just stop emitting them all together," Prather said. "And we can change our temperatures on a much faster time scale in our lifetime. We'd be able to make changes on time scales of months versus hundreds of years."