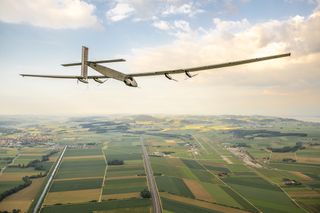 The Solar Impulse 2, a fully solar-powered aircraft, is scheduled to set off on a round-the-world journey from Abu Dhabi in March 2014.
(Image: © Solar Impulse)

The first solar-powered flight around the world will take off from and touch down in Abu Dhabi, capital of the United Arab Emirates, officials announced today (Sept. 25).

In March 2015, pilots Bertrand Piccard and André Borschberg plan to make the round-the-world journey in the Solar Impulse 2, an aircraft that runs exclusively on power from the sun.

The announcement of the host city was made in New York City, at the United Arab Emirates reception during the United Nations General Assembly. [Video: Watch the Maiden Voyage of the Solar Impulse 2]

"We have chosen [Abu Dhabi] as being the best and most suitable departure point for the round-the-world tour, due to its climate, infrastructure and commitment to clean technologies," Borschberg, Solar Impulse co-founder and CEO, said in a statement.

Abu Dhabi's renewable energy company Masdar will partner with the city to host the Solar Impulse team beginning in January, when the crew will test the aircraft prior to its historic trip.

In 2013, Borschberg and Piccard flew their first solar-powered plane, the Solar Impulse, on five legs of a cross-country flight from California to New York. The aircraft was powered entirely by sunlight, and carried batteries that could be charged during the day, which enabled the pilots to fly the plane at night.

The Solar Impulse 2 (SI2) is a newer version of the original aircraft, with a wingspan that measures 236 feet (72 meters) — wider than a Boeing 747. The SI2 carries 17,000 solar cells, allowing it to fly almost indefinitely without fuel. The aircraft weighs just 5,070 pounds (2,300 kilograms), less than a Toyota Tundra pickup truck, according to company officials.

Borschberg and Piccard unveiled the new aircraft in April, and completed their first test flight in June. Their round-the-world trip next March is expected to include 25 days of flying over the course of four to five months. The pilots will live aboard the plane for five to six days at a time during some flights over the Pacific and Atlantic oceans.

The team is still working out details of the trip, but the company has revealed plans to stop over in Asia, the United States and Southern Europe or North Africa before returning to Abu Dhabi in July 2015.