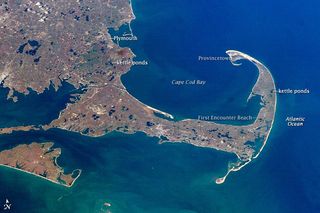 A cape is defined as a pointed piece of land that sticks out into a sea, ocean, lake, or river.
(Image: © ISS Crew Earth Observations experiment and Image Science & Analysis Laboratory, Johnson Space Cente)

On May 15, 1602, Bartholomew Gosnold, an English explorer, and leader of the first European expedition to Cape Cod wrote, "Near this cape ... we took great store of codfish ... and called it Cape Cod," and so Cape Cod got its name.

English separatists, also known as pilgrims soon followed Gosnold. On Nov. 21, 1620, they dropped anchor off the shores of modern-day Provincetown. Cape Cod is located at the extreme southeast corner of Massachusetts. The Cape is roughly 400 square miles (1,036 square kilometers) with 560 miles (901 km) of shoreline. The fishhook-shaped Cape stretches roughly 70 miles (112 km) from the Cape Cod Canal to Provincetown's Race Point , and it is 20 miles (32 km) wide at its widest point and 1 mile (1.5 km) wide at its narrowest.

The cape is surrounded by Cape Cod Bay to the north and Buzzards Bay to the west. It is connected to the mainland by two bridges, the Sagamore and the Bourne.

A cape is defined as a pointed piece of land that sticks out into a sea, ocean, lake, or river.

The island is referred to in three segments: upper, middle and lower cape. The terms 'upper' and 'lower' have nothing to do with north and south though they derive from maritime terms, from when the most common means of transportation was by boat. The prevailing westerly winds meant that a boat with sails traveling northeast in Cape Cod Bay would have the wind at its back and thus be going downwind, while a craft sailing southwest would be going against the wind, or upwind.

The Cape itself is a terminal moraine (an accumulation of rocks and debris at the outermost edge of where a glacier or ice sheet existed), created by the Laurentide Ice Sheet that dominated much of the northern landscape of North America between 16,000 to 20,000 years ago.

The area was both built up and scoured by the ice sheet, which stretched down past Martha's Vineyard and Nantucket during Earth's last major Ice Age. In their advance and retreat, the glaciers composing the ice sheet scraped rock off of Earth's surface, eventually depositing it on Cape Cod. The U.S. Geological Survey estimates that the deposits are 200 to 600 feet (60 to 186 m) thick across the region.

As the ice sheet retreated, sediments washing out of the glaciers occasionally covered chunks of ice. Those ice blocks would eventually melt and collapse the sediments, creating the space for the fresh groundwater-fed ponds we see today, which are known as kettle hole ponds.

In this photo, taken by astronauts aboard the International Space Station, the rocks that were left behind are not visible, but you can see the dozens of kettle hole ponds left on the island.