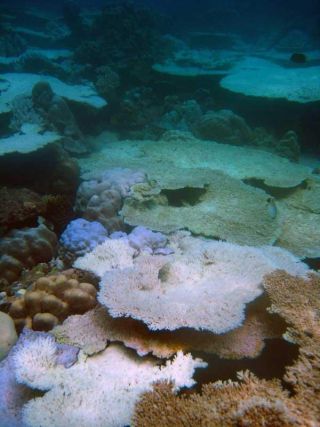 Bleached coral in the waters off Aceh province in Indonesia.
(Image: © WCS Indonesia)

One of the most destructive and swift coral bleaching events ever recorded is underway in the waters off Indonesia, where water temperatures have climbed into the low 90s, according to data released by a conservation group this week.

The Wildlife Conservation Society (WCS) says a dramatic rise in sea temperature , potentially linked to global warming, is responsible for the devastation.

In May, the WCS sent marine biologists to investigate coral bleaching reported in Aceh a province of Indonesia located on the northern tip of the island of Sumatra. The initial survey carried out by the team revealed that more than 60 percent of corals in the area were bleached.

Subsequent monitoring of the Indonesian corals completed in early August revealed one of the most rapid and severe coral mortality events ever recorded. The scientists found that 80 percent of some species have died since the initial assessment, and more colonies are expected to die within the next few months.

"This is a tragedy not only for some of the world's most biodiverse coral reefs, but also for people in the region, many of whom are extremely impoverished and depend on these reefs for their food and livelihoods," said WCS Marine Program Director Caleb McClennen. Coral reefs provide haven for fish and other creatures, and larger fish tend to congregate around reefs because they are good places to feed.

Bleaching a whitening of corals that occurs when symbiotic algae living within coral tissues are expelled is an indication of stress caused by environmental triggers such as fluctuations in ocean temperature. Depending on many factors, bleached coral may recover over time or die.

The event is the result of a rise in sea surface temperatures in the Andaman Sea an area that includes the coasts of Myanmar, Thailand, the Andaman and Nicobar Islands and northwestern Indonesia. According to the National Oceanic and Atmospheric Administration's Coral Hotspots website, temperatures in the region peaked in late May at more than 93 degrees Fahrenheit (34 degrees Celsius). That's 7.2 degrees Fahrenheit (4 degrees Celsius) higher than long-term averages for the area.

"It's a disappointing development particularly in light of the fact that these same corals proved resilient to other disruptions to this ecosystem, including the Indian Ocean Tsunami of 2004 ," said WCS Indonesia Marine Program Director Stuart Campbell.

Surveys conducted in the wake of the 2004 tsunami revealed that the many reefs of Aceh were largely unaffected by this massive disturbance. Indeed, reefs severely damaged by poor land use and destructive fishing prior to the tsunami had recovered dramatically in the intervening years due to improved management. Government and community-managed areas in the region have been remarkably successful at maintaining fish biomass despite ongoing access to the reefs. But the bleaching and mortality in 2010 have rapidly reversed this recovery and will have a profound effect on reef fisheries.

Of particular concern is the scale of the warmer ocean waters, which the NOAA website indicates has affected the entire Andaman Sea and beyond. Similar mass bleaching events in 2010 have now been recorded in Sri Lanka, Thailand, Malaysia and many parts of Indonesia.

"If a similar degree of mortality is apparent at other sites in the Andaman Sea this will be the worst bleaching event ever recorded in the region," said Andrew Baird of James Cook University in Australia. "The destruction of these upstream reefs means recovery is likely to take much longer than before."

Efforts to bring back the reefs will have to be both local and global in scale, McClennen said.

"Immediate and intensive management will be required to try and help these reefs, their fisheries and the entire ecosystem recover and adapt," he said. "However, coral reefs cannot be protected from the warming ocean temperatures brought on by a changing climate by local actions alone. This is another unfortunate reminder that international efforts to curb the causes and effects of climate change must be made if these sensitive ecosystems and the vulnerable human communities around the world that depend on them are to adapt and endure."