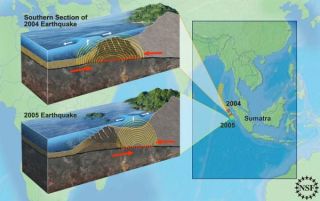 The fault that ruptured in 2004 was able to move much more of the seafloor than the quake that followed it.
(Image: © Nicolle Rager Fuller/NSF.)

In late 2004 and early 2005, disastrous earthquakes shook Sumatra, an island in western Indonesia. The two earthquakes, both among the biggest on record, struck just months apart along the same fault, yet the first quake produced the deadliest tsunami in modern history, while the second quake's tsunami was far less dramatic. A new study reveals why.

On Dec. 26, 2004 a 9.1-magnitude undersea earthquake rumbled near Sumatra and stretched 750 miles (1,200 kilometers) to the north. The resulting tsunami devastated coastlines along the Indian Ocean, with tsunami waves up to 100 feet (30 meters) high. More than 230,000 people died and millions were left homeless.

Three months later in 2005, an 8.7-magnitude earthquake hit immediately to the south and triggered a smaller tsunami that killed 1,300 people. Scientists were unsure why the quakes produced tsunamis that were so different since the ruptures were on adjacent segments of the same fault a fracture in the Earth's crust.

The new study, detailed in the July 9 issue of the journal Science, has revealed that the part of the fault that ruptured in 2004 was able to move much more of the seafloor than the quake that followed it. Because tsunami waves are generated by the motion of the seafloor acting much like a giant underwater paddle a quake that moves more seafloor creates a larger tsunami.

"Both earthquakes occurred on the same fault system, initiating 19 to 25 miles (30 to 40 km) below the seabed," said geologist and study co-author Simon Dean of the University of Southampton in England. "Our results will help us understand why different parts of the fault behave differently during earthquake slip which then influences tsunami generation. This is critical for adequate hazard assessment and mitigation."

Working aboard the research vessel Sonne, the scientists used seismic instruments to probe layers of sediment beneath the seafloor with sound waves. The probes revealed that the 2004 fault is a lower density fault zone than the surrounding rocks. This helped the fault move closer to the seafloor during the first earthquake.

In the segment of the fault that moved in 2005, there was no evidence for such a low-density fault zone, which explains why its tsunami was smaller.

The researchers discovered a number of other unusual features at the rupture zone of the 2004 earthquake such as the seabed topography, deformed sediments and the locations of small earthquakes (aftershocks) following the main earthquake.

Sumatra experiences frequent seismic activity because it is located near the boundary of two of Earth's tectonic plates the rocky plates floating on the scorching, molten rock inside the Earth, known as the mantle. Earthquakes occur at what's known as subduction zones, such as the one west of Indonesia, when one tectonic plate is forced under another. Instead of sliding across one another smoothly, the plates stick, and energy builds up until they finally slip or rupture, releasing that stored energy as an earthquake.

By comparing the subduction zone west of Indonesia with other subduction zones around the world, the research team believes the region of the 2004 Sumatra earthquake is very unusual, suggesting that tsunami hazards may be particularly high in this region.

"By understanding parameters that make a particular region more hazardous in terms of earthquakes and tsunami we can speak to potential hazards of other margins," said study co-author Sean Gulick of the University of Texas at Austin. "We need to examine what limits the size of earthquakes and what properties contribute to tsunami formation."