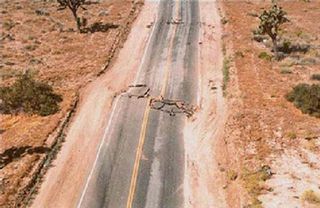 Some powerful earthquakes can set off other big quakes on faults many miles away, with just a tiny nudge, because the faults have become synchronized over millennia, a new study suggests.

Scientists already knew that big earthquakes can trigger other big quakes by transferring stress along a single fault, but they did not know about the synchrony. Here's how it works:

When a fault ruptures in a large earthquake, the movement releases stresses that may have built up over hundreds or thousands of years and transfers some of that released stress to nearby faults. In order for that tiny added stress to trigger a large earthquake on a nearby fault, that fault had to already be very near its breaking point, said study author and seismologist Christopher Scholz of Columbia University in New York.

For the two faults to have been simultaneously near their breaking points requires them to be synchronized in their seismic cycles.

"All of a sudden bang, bang, bang, a whole bunch of faults break at the same time," Scholz said.

That changes how future quake risk will be assessed. Seismologists had assumed that when a fault ruptures, the risk for another big quake generally goes down.

"Now that we know that some faults may act in consort, our basic concept of seismic hazard changes," Scholz said. "When a large earthquake happens, it may no longer mean that the immediate future risk is lower, but higher."

The researchers analyzed earthquake patterns as far back as 15,000 years and identified strings of related earthquakes. Their work explains how closely spaced faults that rupture every few thousand years might align themselves to rupture almost simultaneously.

Southern California's Mojave Desert, the mountains of central Nevada and the south of Iceland each may have synchronized, or "phase locked," faults in their respective immediate vicinities, according to the study, detailed in the June issue of the Bulletin of the Seismological Society of America.

When faults lie relatively close, between 6.2 and 31 miles (10 and 50 km) apart, and are moving at comparable speeds, they may break successively over time because their cycles may eventually fall in sync, Scholz said. This is similar to how two pendulums hanging off the same rod will become synchronized as their motions are communicated along the rod.

In the Mojave Desert, the Camp Rock fault, off the San Andreas fault, ruptured in 1992, causing a magnitude 7.3 quake in the town of Landers, killing one child. Seven years later, the Pisgah fault, 15 miles (24 km) away, broke, causing a magnitude 7.1 quake at Hector Mine, inside the Twentynine Palms Marine Corps Base.

However, seismologists have yet to come up with a reliable method for predicting imminent earthquakes; the best they can do so far is to identify dangerous areas, and roughly estimate how often quakes of certain sizes may strike.