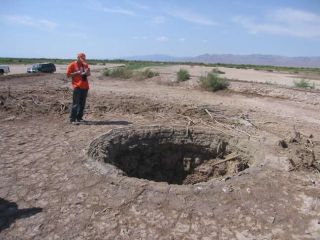 As if the San Andreas Fault weren't long and menacing enough, newly found mud pots and mud volcanoes now suggest it extends another 18 miles, going under the Salton Sea and beyond, in the desert southeast of Palm Springs.

The extension is probably inactive.

U.S. Geological Survey researchers David K. Lynch and Kenneth W. Hudnut report this result after a survey of mud pots in the area immediately east of the southeastern-most portion of the Salton Sea in Imperial County, Calif.

Using satellite imagery and a physical examination of the land, they identified a cluster of 33 mud pots, mud volcanoes and sink holes which, when plotted, form a clear linear pattern that suggests an underground rift or fault.

"The presence of a linear field of geothermal features is evidence of a planar rift extending to considerable depth in the crust," Lynch and Hudnut write in the August issue of the Bulletin of the Seismological Society of America.

Mud volcanoes, on the other hand, are elevated conical structures composed of accumulations of viscous mud extruded from a central vent. They range from finger-sized to several miles across, though the largest in the Salton Sea area are about 6 feet (2 meters) high. Small mud volcanoes on land, ranging from one to 10 feet in height, are usually called mud cones or gryphons and are usually associated with volcanic and seismic activity.

"Water and gas (CO2 mostly) coming up from below the surface must have a source," Lynch explained. "It is usually associated with an opening in the crust that reaches down to a magma body relatively close to the surface (like Yellowstone). The fact that [the mud pots and mud volcanoes] line up indicates a fault. The fact that they line up with the end of the San Andreas Fault suggests that the two are connected somehow."

Lynch said he was "very surprised" to find that the mud pots line-up. "I was not looking for a fault. I was simply studying the mud pots," he told LiveScience. "When I noticed the alignment, I knew it meant something, probably a fault. A few days later, I plotted up the pots and noticed that they lined up with the accepted end of the San Andreas Fault. That's when I got excited and contacted Ken Hudnut."

Geologists had suspected that the San Andreas Fault extended beyond its agreed-upon terminal point near Bombay Beach, a location about midway along the eastern shore of the Salton Sea, but no one had previously had found any evidence at the surface, Lynch said. Erosion, seismic inactivity and agriculture erased any previously identifiable evidence.

The Salton Sea is an extremely salty, below-sea-level lake and the largest lake in California. It formed starting in 1905 when rainfall forced the Colorado River to swell and breach a nearby dike. The town of Salton and some Indian land was submerged by the time the flooding was controlled, two years later. Today, the lake, which supports diverse birds migrating along the West Coast, is fed mostly by agricultural run-off flowing into nearby rivers.

The San Andreas Fault is a 700-mile plate boundary in California, separating the Pacific and North American plates. Seismologists say that enough stress has accumulated at the fault to generate the next "Big One," an earthquake of magnitude 7.0 or greater, any day now or 10 years or more from now. Southern California is at greatest risk because there has been no big quake there along the San Andreas in more than 250 years, said Yuri Fialko at the Scripps Institution of Oceanography at the University of California, San Diego.

Lynch said the new evidence of the San Andreas extension indicates that the region is more complicated than researchers previously thought.

"The extension of the San Andreas does not appear to be active. It is probably a very old part of the fault, and helps to explain the larger, more complex transition area between the Imperial fault and San Andreas Fault, called the Brawley Seismic Zone," he said.