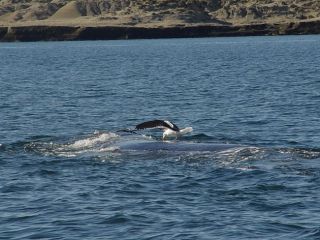 A gull pecks at the skin and blubber of a right whale off the coast of Argentina.
(Image: © © Mariano Sironi, Instituto de Conservación de Ballenas)

Hundreds of baby whales died off the coast of Argentina between 2003 and 2014, and seagulls may have played a role in their deaths, a new study suggests.

While you might think of seagulls as mere pests — squawking masses of feathers that loom over the beach, waiting for dropped potato chips — these birds pose a serious threat to several species of animals, including the southern right whale (Eubalaena australis).

Gull harassment of right whales off Argentina's Península Valdés has been observed since the 1970s. That's when kelp gulls (Larus dominicanus) were first seen pecking the skin and blubber off the backs of adult female whales that use this sheltered spot off Argentina's Atlantic coast as a calving ground. Since then, researchers from universities and conservation institutions in Argentina and the United States have monitored how the gulls interact with the local whale population. Their most recent observations of the gulls' continued harassment of right whales — and this behavior's potential link to soaring calf deaths — were published last month (Oct. 21) in the journal PLOS ONE. [Beastly Feasts: Amazing Photos of Animals and Their Prey]

The kelp gulls' feisty feeding behavior has gotten progressively worse since it was first documented, said Victoria Rowntree, a research associate professor in the biology department at the University of Utah and one of the authors of the new study.

However, the relationship between gulls and right whales started innocently enough. The birds would hover over the giant mammals as they breached, or jumped out of the water to breathe, Rowntree told Live Science. When breaching, some of the whale's dead skin is sloughed off, floating to the surface and providing a tasty snack for gulls, she said. But several decades ago, the gulls adapted this behavior to include pecking at resting whales as they swim near the surface of the water.

"A graduate student [Peter Thomas] observing the whales noticed that the seagulls had begun to land on top of the mothers and peck at them, making a hole," Rowntree said. "Then, in subsequent attacks throughout the season, they'd make the hole larger."

These holes, or lesions, grew to be large ovals. But starting in the 1990s, something changed: Fed-up mother whales started defending themselves against the birds' attacks by changing their posture —keeping their backs underwater when they swan near the surface, Rowntree said. This was good news for mother right whales, but bad news for their babies.

"The zero- to three-month-old calves don't know how to keep their backs underwater," Rowntree said. "Their backs are too small to arch, and now, the gulls' primary targets are the newborn calves."

In the 1980s, when mother whales were still the gulls' primary targets, the average right whale calf had just two small lesions on its back. But by the 2000s, the average number of lesions on the calves' backs had grown to 20. One calf that had been repeatedly pecked at by the birds had lesions covering 19 percent of its back, the study found.

The increase in lesions on baby whales in recent years is linked not only to a decrease in lesions on mother whales but also to an increase in the frequency of gull attacks, according to the study, which states that such attacks have increased "dramatically" over the past three decades. By the late 1990s, mother-calf pairs were spending an estimated 20 percent of daylight hours dealing with such attacks, Rowntree said.

Cause of death: unknown

But is this surge in gull attacks (and, therefore, wounded baby whales) truly linked to an increase in calf deaths? That's the question that researchers are trying to answer. At least 626 right whale calves died off Península Valdés between 2003 and 2014, but the study authors are not sure why so many of the animals perished.

The data collected by the study authors confound the issue. While the severity of legions on baby right whales has increased moderately from year to year, there has been a large year-to-year variance in calf deaths since 2000. In other words, more wounds do not necessarily mean more calf deaths in any given year.

But there are a number of hypotheses about how constant harassment from gulls, coupled with the wounds these animals inflict, might contribute to the mortality rate of baby whales. For one thing, the researchers suggest that dealing with the near-incessant attacks leaves little time or energy for nursing or playing, both of which are important to baby whales' healthy development.

The constant stress caused by the gulls and the open wounds they inflict might also inhibit a calf's ability to fend off other threats, like dehydration, parasitic infection or even hunger (a baby whale feeds on its mother's milk, which could be diminished as she uses up fat stores to flee gull attacks).

And whales aren't the only marine mammals that endure attacks by hungry seagulls. In Namibia, seagulls peck out the eyes of juvenile Cape fur seals, making them highly vulnerable to repeat attacks in which the gulls consume the baby seals' skin and blubber. This research suggests that attacks by kelp gulls could potentially lead to the deaths of "young marine mammals" that can't easily recover from injuries caused by the gulls, according to the authors of the new study.

Whether the gulls are directly responsible for the deaths of so many baby whales remains a mystery, but one thing is for certain: These birds are, if nothing else, "successful opportunists," Rowntree said.

Editor's Note: This story was updated with revised information from Victoria Rowntree.