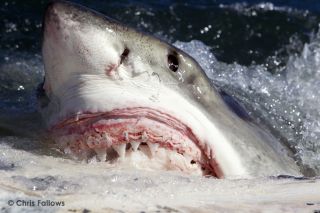 Great white sharks feast together on dead whales, which are important food resources for the normally solitary predators, a new study finds.

Drawn by wind-blown slicks of chemicals from decomposing flesh, great white sharks measuring up to 16 feet (5 meters) long gathered at floating carcasses near South Africa's Seal Island, gorging on blubber, researchers found during observing trips in 2000-2010. These giant sharks rarely appear near the coast but may cruise nearby, waiting to pounce on dead or dying whales, the researchers said.

"These massive sharks come in pretty quickly — within less than 24 hours," of a dead whale’s arrival, said study co-author Neil Hammerschlag, a marine ecologist at the University of Miami. "We hypothesize these animals are cruising the coastline to take advantage of these types of situations."

The communal feasts attracted as many as 40 great white sharks throughout the day, with up to five feeding at once, the authors reported in the April 9 issue of the journal PLOS ONE. There was no fighting, even when one shark accidently bit another on the head, leaving behind two teeth, Hammerschlag said. However, a definite pecking order existed.

"The biggest sharks came right in, targeting areas of highest blubber content, while smaller sharks fed on areas with less blubber or kept their distance from the whale, mostly scavenging on pieces of blubber that drifted away from the carcass," lead study author Chris Fallows of Apex Shark Expeditions said in a statement.

The great whites apparently knew how to find the choicest whale flesh. One shark nibbled its way down a carcass, "like eating corn on the cob," Hammerschlag said. Several times, researchers watched sharks swallow blubber and barf it back up, then immediately tear off another piece, seemingly searching for the best chunks. One shark also removed and ate the dead near-term fetus of a Bryde's whale. [Watch a video of the shark feasts]

Eventually, the sharks ate so much they couldn’t open their jaws wide enough to take another bite, though they kept bumping their heads against the whale, the study found.

While shark foraging at whale carcasses has been seen before, the new study emphasizes the important role whale carcasses play as high-calorie food for mature great white sharks, the researchers said.

"Scavenging is a really important component of the foraging ecology of predators," Hammerschlag said.

And doesn't a feeding frenzy with blood, guts and slabs of dead whale sound like a perfect place for a date? The amiable mood created by the abundant food could be the perfect ambiance for shark mating, the study suggests.

The feeding frenzy also could have a cascading effect on local marine life: If sharks fill up on whale blubber, they eat fewer seals, which, in turn, start eating more of their favorite foods, like sea urchins, the researchers said. And after the great white sharks strip the whale blubber, the carcass sinks to the seafloor, where a host of species finishes off the remaining flesh.

"Apex predators play an important role in ecosystems, and this is another example," Hammerschlag said. "[Great white] sharks are a species of conservation concern globally, and this will help us understand more about their food web dynamics."