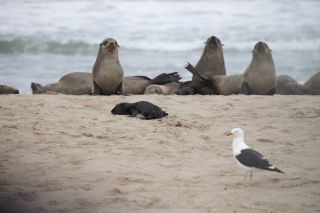 A kelp gull approaches a sleeping juvenile seal on the beach at Pelican Point in Namibia.
(Image: © Naude Dreyer)

Hungry seagulls on the coast of Namibia have a gruesome way of snacking: they peck out and consume the eyeballs of baby seals, according to a new study.

But that's not the only strange eating habit these birds have, the researchers said. The kelp gull (Larus dominicanus) has also been observed pecking skin and blubber off adult and juvenile whales in South America. And in Chile, the birds supplement their seafood diet with a real delicacy: olives.

To humans, the kelp gulls' meals may sound horrific, but this bird's eclectic palate is what makes it such a "highly successful" predator and scavenger, according to researchers from the University of Miami, who published their findings about the birds' eyeball-eating behavior on Aug. 18 in the African Journal of Marine Science. [Beastly Feasts: Amazing Photos of Animals and Their Prey]

For 15 years, researchers have been keeping tabs on populations of kelp gulls and Cape fur seals at Pelican Point, in Namibia's Dorob National Park. In the winter months, between 20,000 and 80,000 Cape fur seals make their home on this stretch of beach along the southern Atlantic Ocean. And they share the beach with several thousand breeding pairs of kelp gulls.

As far back as 25 years ago, researchers studying the wildlife of coastal Namibia predicted that one day, the presence of both seals and gulls on the country's coast — mixed with the fact that overfishingwas steadily killing off both species' main food source — might lead to conflict.

And they were right.

The gulls' eyeball-gouging sounds scary, but it's really just a clever hunting tactic, the researchers said. By pecking out a seal's eyes, the gull renders its prey blind, making it tough for the baby animal to escape, said Austin Gallagher, a research scientist at the University of Miami and lead author of the new study.

The scientists recorded about 500 eye-pecking attacks over the course of the 15-year observational study, and about half of those attacks were "successful," according to the researchers. A successful attack started when a gull approached a newborn seal that had wandered away from its mother or when the gull happened upon a sleeping juvenile seal. Then, the gull went for the creature's eyes — rapidly pecking at the ocular region in an attempt to pluck out the animal's eyeballs and eat them.

But eyeball-eating didn't signal the end of the attack, the researchers said. After consuming the seal's eyes, successful gulls pecked the bodies of the chubby baby seals, going for the soft, exposed regions of the underbelly and anus. Usually, other gulls would see the carnage and join in the meal, the researchers found. But there is good news: sometimes the baby seals escaped, at times receiving help from a larger, seagull-biting adult seal.

The kelp gull's taste for seal meat may be a new trend, but it's also possible that these birds have been plucking out seal eyeballs for a long time and no one ever noticed before, Gallagher told Live Science in an email. As to why the seagulls do this, Gallagher said the reason is likely very simple: Seals are plentiful, fish are not, and gulls go for the meal that's easier to find. [Gallery: Seals of the World]

A similar story is unfolding on the other side of the Atlantic Ocean, as well. Off the coast of Argentina's Valdes Peninsula, right whale adults and their young are under constant attack by kelp gulls, a species whose population in that region has tripled in size since the 1980s, according to Victoria Rowntree, a research associate professor in the biology department at the University of Utah, who was not involved with the new study.

In 1998, Rowntree and several of her colleagues published their observations of the gulls' morbid feeding behavior in the journal Marine Mammal Science. Things haven't gotten any better for the right whales since then, she said.

"Usually, when a whale breaches and leaps out of the water, lots of gulls will go chasing after the breach," Rowntree told Live Science. The gulls are scavenging pieces of the whale's skin, which slough off as the animal hits the surface of the water, she added.

But in the early 1980s, a graduate student studying whales off the Valdes Peninsula in Patagonia (a nursery ground for southern right whales) noticed that some of the gulls also pecked at the whales as they breached, leaving small holes in the animals' backs. As the whales raised their young over the next several months, the gulls would continue these attacks, pecking at the original holes to reach the nutrient-rich blubber under the skin until the holes widened into large lesions.

The gulls' feeding behavior has gotten progressively more aggressive through the decades, Rowntree said. However, some adult whales have adapted their behavior to ward off their avian attackers. Female right whales now arch their backs when surfacing for a breath in such a way that the birds can't peck through their skin, she said. But this modified breaching behavior caused another problem, Rowntree added, because the thwarted gulls began pecking at baby whales that are too naïve to mimic mom's breach.

"Now their new targets are the newborn calves. Some of them have 10 or 15 lesions down the middle of their backs," said Rowntree, who added that a gull will sometimes follow a calf, pecking at it for about a third of a mile (half a kilometer) before returning to the beach for a rest and giving its blubbery meal up to another gull.

Why do the gulls resort to eating whale blubber when there are other food sources nearby (namely, shellfish)? Again, the answer is simple: the whales are an easier meal than shellfish, which are only exposed to the gulls' pecking beaks during low tide, Rowntree said.

But even Rowntree admitted that these insidious gulls are smart. Their intelligence and ability to learn new, complex behaviors from one another, and even from other bird species, makes them successful predators, whether they're gouging out a seal's eyeballs or pecking at baby whale blubber.