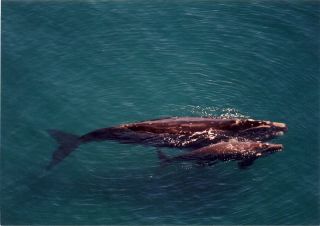 A mother and calf pair of southern right whales in the waters of coastal Patagonia.
(Image: © G. Harris/Wildlife Conservation Society)

Scientists still don't know why hundreds of baby southern right whales are turning up dead around Patagonia, a decade after observers first saw signs of the worst die-off on record for the species, according to the Wildlife Conservation Society (WCS).

With no evidence of infectious diseases or deadly toxins in whale tissue samples, scientists are scrambling to determine a cause of death. Some are even pointing a finger at blubber-eating birds.

The whales come to the peaceful Atlantic bays around Peninsula Valdes along Argentina's Patagonian Coast to give birth and raise their young. At least 605 dead right whales have been counted in the region since 2003, WCS officials say. Of those, 538 were newborn calves. Last year, the mortality event was especially severe, with a record-breaking 116 whale deaths, 113 of them calves. [Whale Album: Giants of the Deep]

"In 2012 we lost nearly one-third of all calves born at the Peninsula," said Mariano Sironi, scientific director of the Instituto de Conservacion de Ballenas in Argentina. "Southern right whales have their first calf when they are nine years old on average. This means that it won't be until a decade from now that we will see a significant reduction in the number of calves born, as all of the female calves that died will not be contributing any new offspring to the population," Sironi, who is also an advisor to the Southern Right Whale Health Monitoring Program, added in a statement.

Sironi and colleague Vicky Rowntree, who is co-director of the monitoring program, have studied a strange phenomena that could be stressing southern right whales. They say kelp gulls at Peninsula Valdes land on the backs of the cetaceans to eat their skin and blubber.

"The attacks are very painful and cause large, deep lesions, particularly on the backs of young 2-6 week-old calves," the researchers said in a statement from WCS. "This harassment can last for hours at a time. As a result, right whale mothers and their calves are expending much precious energy during a time of year when mothers are fasting and at a site where little to no food is available to replenish fat reserves."

The situation is discouraging for a species that had made a significant comeback since its population was depleted by the whaling industry.

"The southern right whale population is still only a small fraction of its original size, and now we have reason to worry about its recovery," Rowntree said.

Though the southern right whale is not listed as endangered, conservationists warn that the species' sister populations could go extinct if hit with a mysterious die-off on this scale. For instance, there are thought to be just about 500 North Atlantic right whales remaining.