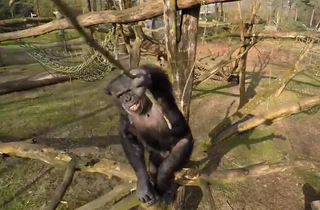 A disgruntled chimpanzee smacked down a drone that strayed too close to its zoo enclosure.
(Image: © YouTube screenshot, Burgers' Zoo)

Drones are becoming increasingly popular in everyday life, but the technology still has some kinks to work out.

In the latest example, a drone crashed and burned while carrying a shipment of asparagus to a restaurant in the Netherlands, according to news reports. The doomed delivery was part of a stunt the restaurant pulls every year to get the freshest vegetables. But something went wrong, and the tiny aircraft fell to the ground and burst into flames, charring its precious cargo, according to BBC News.

The asparagus fiasco wasn't the only drone disaster to make headlines. Here are a few of the more memorable ones. [5 Surprising Ways Drones Could Be Used in the Future]

In January, a "quadcopter" drone crashed onto the White House lawn at 3 a.m. The downed miniature aircraft wasn't a terrorist plot or spying attempt gone awry, but the drunken exploit of an off-duty government intelligence agent, who accidentally flew the drone onto the presidential property, according to the subsequent investigation. The event only served to highlight gaps in the Secret Service's already porous security system.

In March, the Secret Service said it would itself begin test-flying drones over the U.S. Capital. The announcement came just weeks after the Federal Aviation Administration announced regulations for the use of commercial drones.

The phrase "going ape" took on new meaning recently, when a chimpanzee at a Dutch zoo batted a drone out of the sky. The drone, which was carrying a GoPro camera, was being used to film an animal TV show, Fox8 reported, citing the Royal Burgers' Zoo. The zoo posted a video of the angry ape knocking down the annoying craft with a stick.

Further proof that drones have almost unlimited uses: One of these flying crafts crashed while attempting to deliver drugs, cellphones and weapons to a prison. The craft was found trapped in razor wire at a British prison, after it collided with a wall. It is thought to be the first time a drone has been used to smuggle drugs into a U.K. prison, RT.com reported.

The one time you don't want to crash a drone is in a live demonstration in front of the U.S. Congress. But earlier this year, representatives from the company 3D Robotics apparently had a technical problem while flying a drone during testimony before the House of Representatives' Science, Space and Technology Committee.

"And that’s your worst-case scenario," one of the committee members said, according to the Chicago Sun Times, while another member added, "Maybe we won’t fly over people."

When these new airborne visitors appear, they aren't always welcome. A Chicago couple was none too pleased when a stray drone landed in their yard, and they "trapped [the vehicle] with lawn chairs" until police came to retrieve it, NBC Chicago reported. The husband called the incident an invasion of privacy, saying it could be a real estate agent or a burglar attempting to find out if anyone was home.