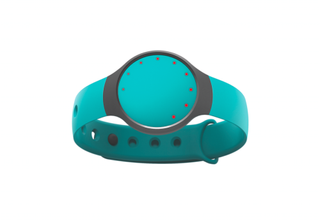 The Misfit Flash is an activity and sleep tracker that you can wear on your wrist, clip onto your belt or dangle from your keychain. This colorful device measures the number of steps you take in a day, as well as your distance traveled and calories burned. It also tracks how long (and how soundly) you sleep at night.

With so many ways to wear the Flash and seven color options to choose from, it's clear that Misfit wanted this tracker to appeal to a wide range of users. And its affordable price — it retails for between $34 and $50 — might make this device particularly appealing to those who want to try out the whole activity- and sleep-tracking thing without spending $50 more on Misfit's other tracker, the Shine, or other similar trackers in the $100-$150 range.

I wore the Flash for a week to see how well this bargain tracker holds up in daily life. [Fitness Tracker Buying Guide]

This was my first time reviewing a Misfit product, and I have to say that I'm a little torn on how to judge this company's approach to wearables. On the one hand, I really enjoyed interacting with the Misfit app. I thought it was easy to navigate and I liked the way it displayed my data. I also found the point system that the app uses to be truly motivating, and a great alternative to other trackers, which simply set a goal for how many steps I should take in a day.

On the other hand, the physical Flash device left a lot to be desired. I disliked the fact that there's no display screen on the tracker, but I could have lived with this if the LED light system used to indicate activity and time of day wasn't so confusing and tricky to use correctly. And, the fact that I went through two wristbands (both cracked) during the one week that I reviewed this device has me wondering if this cheaply made tracker is worth even its relatively low price.

The Flash is a small plastic disc that slips into either a wristband or a small clip that hooks onto just about anything, including your shoe, waistband or keychain. I wore the tracker on my wrist because I wanted to be able to easily check the time of day and my progress toward my activity goals throughout the day.

Or at least, I wore it that way until the sport band cracked and fell apart.

A few days after I started wearing the device, the plastic disc that contains the Flash's battery and sensor came loose and fell out of the wristband. When I tried to put it back in place, the plastic ring that holds the Flash inside the wristband cracked. After that, I couldn’t get the disc to fit in the band at all. Luckily, we had another Flash in the Live Science office for review purposes, so I borrowed the wristband from that device, and tried to slip the disc into place. But the plastic ring on that wristband broke, too, in exactly the same spot as the first one.

I'm not the only one who had this problem: Amazon is loaded with one-star reviews from users who experienced similar problems with the Flash's sport band. The device is made of polyurethane and polycarbonates — plastics that Misfit says are "rugged, yet ultra-comfortable." And while these materials are indeed comfortable and very lightweight — I practically forgot I was wearing the Flash — I think it's safe to say that the device is far from "rugged." However, having the band replaced was very easy. I filled out a form on the Misfit website explaining what went wrong and received a new band in the mail, free of charge, within a week.

Like the new Jawbone UP Move fitness tracker, which also goes for around $50, the Flash doesn't have a display screen. To interact with the device, you press down on the plastic disc, which is like an oversized button. The LED lights embedded in the outer edge of the disc lit up in a circle, to give a rough idea of how much of your daily activity goal you have accomplished so far that day (when all the lights around the circle light up, you know you've reached your goal).

After revealing my activity, the lights flashed again to indicate the time of day. But the disc is a circle (and has no numbers on it), so to show you the time of day, just one of the lights flashes first, to indicate where the "12" is on the face of the disk. Then, the lights turn on around the disc face, to indicate the time. Using this feature was so complicated and required me to reposition the disc so often (to get the "12" into the top position), that I didn't bother using it. It was easier to dig my phone out of my bag to tell the time.

Pairing the Flash with my iPhone via Bluetooth was simple. I had to download the Misfit app and create an account with the company to get started. Although the setup was easy, the device is not that intuitive to use, and I had to go to the product website to figure out what all the flashing lights on the tracker meant. After I watched a few videos, I got the hang of how to read the Flash's display. But as noted, to accurately tell the time, I had to keep reorienting the disc inside the band, and I found that to be really annoying.

Syncing the tracker with my phone was easy and quick. I also really liked the graphics used in the Misfit app, which are easy to read and provided me with all the data I needed to see at a glance. As soon as I synced up with the app, I could view my step count, calories burned and distance traveled. Beneath those metrics, I could see at what times during the day I had been most active.

My sleep data was laid out in a similar, easy-to-read fashion. I could see at a glance how long I had slept and when during the night I had been deeply asleep versus lightly sleeping. The sleep-tracking feature on this wearable is automatic, so I didn't have to tell the Flash when I was tucking in for the night. This feature gives the Flash an advantage over the Jawbone UP Move, which users have to remember to put into sleep mode at night.

Another user-friendly feature of this device was its long-lasting, non-rechargeable battery. The Flash runs on a coin-cell battery that can the company says can last up to six months, so you (almost) never have to take it off.

Misfit trackers use a point system that translates activity stats, like time spent running or swimming, into earned points. When you create an account in the Misfit app, you set a goal that dictates how many points you'll try to earn every day. I set mine at 1,000 points. Walking for 10 minutes earned me about 100 points, whereas running for 10 minutes earned me about 400 points.

You can also earn points by cycling, swimming or playing sports. However, you can't use the Flash to track specific metrics on these activities. For example, the device tracks how long you spend swimming and rates the intensity of this exercise (though it's not clear how intensity is calculated), but you can't track how many laps you swim or how many strokes you took per lap the way you can with swim trackers like Garmin's Swim Watch.

You can also use the Misfit app to track your body weight over time, but you have to enter your weight manually. Because I have a smart scale that uploads my weight data to its own app on my phone wirelessly, I opted out of this feature. You can also link your Misfit account with MyFitnessPal, as well as other third-party apps, which makes it easier to keep data on exercise and diet all in the same place.

I took the Misfit Flash in the pool and found that you can't use this device to track in-depth swimming metrics, such as the number of laps you've completed or the number of strokes per lap. But you can use this waterproof fitness band to keep track of how much time you've spent in the pool. The Misfit app also graphs your activity level over a 24-hour period. I found that my time spent in the pool was graphed similarly to a brisk walk or any other kind of moderate exercise.

Like most fitness trackers I've brought in the water, the Flash records some, but not all, of your movements during a swim workout. It counted a lot of my strokes and other movements while swimming or treading water as "steps," and included these in my daily total. This might not be a very useful metric for swim training, or for those who want to know how far they swam, but I did like that my activity in the pool counted toward my daily step goal.

Like most of the fitness trackers I've reviewed, the Misfit Flash doesn't do a great job of relating your stats to suggestions on how to improve health. So while the Misfit app is a great place to keep track of how active I've been, it doesn't tell me whether I'm doing enough to stay healthy, or how I could do better.

However, I really liked the point system that Misfit has developed for its trackers. I had more fun trying to reach 1,000 points a day than I did trying to take 10,000 steps a day while wearing Fitbit's new tracker, the Charge.

You can also connect your Misfit account with Facebook to share your stats with people you know and encourage some friendly competition. If you're like me and prefer not to use Facebook, then you can set up a profile through the app and use it to connect with people you know (as well as Misfit users you've never met). This feature lets you see when other Misfit users have reached their goals. You can also compare your stats to those of other users with this feature.