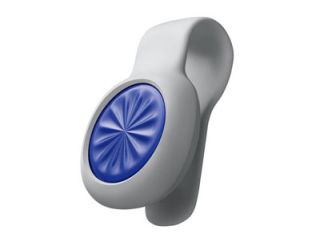 Jawbone's new UP Move fitness trackers will track your steps taken, distance traveled, calories burned and hours slept, and can motivate fitness newbies to see whether their daily activities translate into lax or rigorous workout routines. There are two ways to wear the UP Move, a circular device not much larger than a quarter: You can either pop the disc into a comfortable rubber wristband, or put it in a clip that you can attach to your waistband or pocket. The disc is patterned with textured lines that look like petals on a flower, and has a hidden LED display. Users can press the face to see the time of day, and what percentage of steps they've taken that day.

At $49.99, UP Move is about half the price of the UP24 band, which is the $99 tracker that Jawbone released earlier this year, and about a third of the price of the new UP3, a $179.99 band that tracks multiple activities, including movement, temperature and heart rate. But the UP Move is about the same price as the Fitbug Orb, which also tracks steps, distance, calories and sleep. The battery, which is not rechargeable, lasts up to six months before a new one is needed, according to Jawbone. [Fantasy Fitness Tracker: 8 Absolutely Must-Have Features]

How do the UP Move's features stack up in real life? I wore the tracker for two weeks to find out.

BUY the Jawbone UP in the Live Science store >>>

The pros of the UP Move include its low price and ability to track steps, sleep and calories burned. Once you pair it with other applications, you can tailor it to fit your health needs and compete with friends and family. It also lets you set goals and track your health trends.

The cons of the UP Move are the difficulty to see the time of day quickly and respond correctly to certain clicks. You also have to remember to put it in sleep mode or tell it when you're about to play a sports game or work out. Moreover, the UP Move does not have an alarm or GPS, and it does not track temperature or heart rate.

I'm generally wary of wearing trackers that are stiff or bulky. But I found the UP Move wristband surprisingly comfortable and flexible. The wristband comes in five colors (black, purple, red, white and yellow) and is relatively flat, so it can easily fit under a coat or shirtsleeve. It took me a few tries to secure the band on my wrist the first day — one side of the band fits through a loop and then into a number of holes — but I quickly mastered the technique and now can slide the band on and off with ease.

I found the UP Move more comfortable than the Orb, which is made by Fitbug, a company based in the United Kingdom. The UP Move and the Orb track roughly the same activities and have comparable prices, but the Orb has a rubber wristband, and is thicker and bulkier than the UP Move. Yet the Orb's wristband, with two pegs on one side that fit into holes in the other, is easier to attach with one hand. Although the UP Move is not as fashion-forward as the Misfit Shine, which can even be worn as a necklace, the Jawbone wristband is decidedly slimmer than many other fitness trackers on the market.

The UP Move is water resistant, so no worries if you get it wet when you're running in the rain or dripping with sweat after a workout, but don't submerge it in water.

You basically need two things to start using the UP Move: the battery and a smart device to run the UP application, including an iPhone, iPad or Android device. The battery comes in the package, and the app, which speaks to your smart device using Bluetooth, is easy to download. I normally don't run Bluetooth on my iPhone 5, and I noticed that it drained my battery faster than usual. The UP app is compatible with more than 50 other apps, including The Breakfast Challenge, RunKeeper and Sleepio. I downloaded MyFitnessPal, which tracks calories, weight and exercise. The UP application imports your calorie count, and makes it into a bar graph on your home screen.

Calorie counting is an inexact science, so I'm not sure how accurate MyFitnessPal is in estimating how many calories were in my shakshuka, a Mediterranean dish with poached eggs and tomatoes that I ate for brunch last weekend. But it gives you a general idea about eating habits, and either cheers or chides you for eating foods high in vitamins or carbohydrates. The UP Move app also analyzes the nutrient content of your food, such as its fiber, sugar and unsaturated fat, to inform you whether you're eating a balanced diet.

Moreover, the UP app provides bar graphs of your stats — it shows you how your sleep quality and steps taken have changed since the day you started using the device. Tracking steps is definitely the UP Move's forte; a single tap on the UP Move's face shows the percentage of steps you've taken so far that day. For me, my main source of exercise is playing ultimate Frisbee, and unlike runners or cyclists who have a general sense of the distance they cover, I never knew before how much I was really moving when I was playing ultimate. Using a fitness tracker to count steps is a good measure of activity for people who play other games too.

Through the UP app, you can compete with friends and family to see who is the most active. You can also challenge yourself by timing your activities. To do this, you click on the UP Move's face. I usually forgot to do this before I started playing, but it doesn't matter too much — the app still graphs your activity throughout the day, and shows when you were most active.

It's debatable how well the sensors in fitness trackers can monitor people's sleep, but the UP Move aims to categorize your sleep as "light" or "sound," depending on how much you move. You have to remember to put the tracker into sleep mode, so it's not automatic like the LifeTrak Brite R450 (although our reviewer found the Brite R450 had problems monitoring sleep at night).

I don't like wearing a wristband at night, so I clipped the UP Move to my pajamas when I went to bed.

The app also gives you tips about how to manage your health, such as citing a study from the U.S. National Institutes of Health on how camping in the wilderness helps you get away from artificial light and reset your circadian rhythm. The tidbits are cute, but with my busy schedule, I haven't made the time to follow the institute's advice.

I did have one complaint: I'm used to wearing a wristwatch, and like seeing the time in a glance. You have to click the UP Move twice to see the time, and it rounds it to the nearest 5 minutes using the LED lights. Sometimes I would click it twice, and the screen would give my step percentage instead, so it seems that the device doesn't always respond as it should.

It's useful having a pedometer that shows how well you're meeting your goals. I learned from the device that I usually don't move enough during the week unless I walk home or hit the gym after work. It's also fun to check your steps throughout the day, and I found myself clicking on the UP Move after I walked around the city or ran errands.

I found that counting calories is a task that would take a lot of effort, but I can see how it's helpful when tracking your overall health, especially for people trying to lose weight or maintain weight loss. If people are serious about improving their diet, pairing MyFitnessPal with the UP application could be an effective tool. The UP app also helps you set goals and reminders, such as to eat more fiber or go to bed at a decent hour. These activities, because they are created by the user, will likely be valuable to those individuals.

Unlike other fitness trackers, UP Move does not have an alarm or GPS, nor does it track temperature or heart rate. But for its price, it does help people track their exercise, calories and sleep with relative ease.

I enjoyed using the UP Move, though mostly to check my steps and distance traveled. Depending on the weather, it can be hard to motivate myself to go outside. The UP Move is a reminder that it's healthy to stay active, which usually isn't a problem during the weekend, but can be a real drag on weekdays.

Unlike counting calories or checking my sleep quality, I'm inspired to exercise more with the UP Move. If I had the device for longer, I would probably challenge a friend to a workout contest, and then step up my game to stay competitive.

BUY the Jawbone UP in the Live Science store >>>