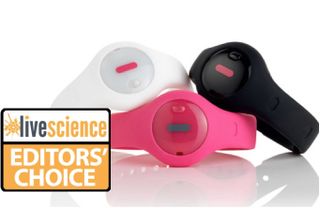 The Orb is a released activity tracker from the United Kingdom-based company Fitbug, and it tracks your steps taken, distanced traveled, calories burned and sleep. The name may sound similar to Fitbit, another popular fitness tracker, but that device comes from a California-based company. The main selling point of the Orb is its affordable price: At $49.95, it's about half the price of the Fitbit Flex and $10 cheaper than the Fitbit Zip. The Live Science testing team picked the Orb as our "Best for the Money" tracker for two reasons: there are more ways to wear the Orb than many other trackers on the market, and users receive emails and notifications with tips that provide you with meaning behind the information that the device tracks, as well as suggestions for improving your health. I wore the Fitbug to test it out — here's what I found.

The pros of the Fitbug Orb include its affordable price, the many ways to wear the device and weekly progress reports.

The cons of the Fitbug include its lack of a screen/interface on the device itself, the requirement that you put the battery in yourself and the inability to set your own activity goals.

There are more ways to wear the Fitbug Orb than for any of the other fitness trackers I've tested. You can put it in the wristband that's included and wear it on your wrist, attach it to your belt/waistband with the clip (like a pedometer) or use the provided lanyard to wear it around your neck. The company also suggests putting the Orb directly in your pocket, or clipping it to your underwear, if you're so inclined.

I found the Orb comfortable to wear. The wristband has several size settings, so I could adjust the strap to fit snuggly around my wrist. However, the belt clip was a little bulky — I found that when I used it, I could often see the orb bulging out from under my clothes. But still, the clip was useful to wear the device while I was running (and less concerned about my appearance).

The Orb uses a lithium battery, which you have to put in yourself by using a coin to twist open the back of the device. This requires some effort. The battery will save you from having to recharge your device every week or two (as is the case with many other activity trackers), but it will eventually need to be replaced after about four to six months, according to Fitbug. Replacement batteries cost $1.50.

The device tracks sleep, but unlike other trackers — such as the Fitbit Flex and the Jawbone Up — the Orb does not have an alarm.

The Fitbug Orb is fairly user-friendly, but it could use some improvement. The device itself is pretty simplistic, with a single button and a light that tells you what mode the device is in. Because there is no screen or interface on the Orb, you'll need to use the Fitbug app (which is available for iPhone and Android) to see your activity information.

The Orb syncs wirelessly with the app when you push down the button once.

The app shows your daily activity — including total steps, aerobic steps, distance traveled and calories burned — as well as your activity history (over the last week), hours of sleep and sleep quality. A monthly calendar lets you go back and review your activity for any point in the past.

The app uses a color code to indicate your progress toward your fitness goals: gray for "keep trying," aqua for "aerobic steps met," brownish-yellow for "total steps met" and magenta if you exceed your activity target. The color-coding system is nice, but the colors don't follow an intuitive sequence (like red, yellow and green, for example), so I had to remind myself continually what each color represented.

The Orb had some trouble tracking my sleep. To put the device into Sleep Mode, you push the button three times, but when I did this (and saw the confirmation of the light flashing five times, indicating the device was indeed in Sleep Mode), it still seemed to record no data. I thought my device was defective, and the company was quick to send me a new Orb.

I later realized that I might not have exited Sleep Mode correctly after waking up, and this may have been the source of the problem. You need to press the button again when you wake, and hold it down until the light flashes. But should neglecting to do this really allow the device to "lose" all the sleep data from the night before?

The Fitbug excels at providing meaning to the information it tracks. Through your Fitbug account, which you create during setup, you can take a health-assessment questionnaire, which asks about your diet, water and alcohol intake, and stress level, as well as other questions. Fitbug tells you not only whether your habits are in line with recommendations, but also what you can do to improve.

For example, I was very honest and told Fitbug I eat only about two servings of fruit and vegetables daily. Fitbug told me the recommended level is nine to 13 portions, and that eating more fruit and vegetables can reduce my risk of stroke and heart disease. The app also suggested, "Start off by adding at least one extra portion a day to your diet," and provided a link to Fitbug's recipe book.

Fitbug does not give you an activity goal right away; it waits until you've been using the device for a week.  Then, it will provide you with a personal target for total steps, aerobic steps and calorie intake. It recommends you try to meet your activity targets five times a week. For sleep, Fitbug recommends you get between 7.5 and 9 hours.

I found the Fitbug Orb inspiring. When you first sign up, Fitbug will email you each day for a week, explaining the features of the program. After that, Fitbug emails you once a week with a progress report of how you did in terms of reaching your targets. With these progress reports, Fitbug provides you with a reason to keep using your tracker.

Fitbug also uses a smiley-face system to depict your progress, which is a cute feature. When you upload nutrition information to your account, an emoticon changes from a sad face to a happy face.

I liked that the Orb set my activity goals for me, but if you wanted to set your own goals, you'd be out of luck.

Although you can post your progress to Facebook, the Fitbug app does not have a way to directly compare your activity with that of your friends, as the Fitbit app does.

Fitbug Orb
Amazon
$7.99
View
We check over 130 million products every day for the best prices
Sign Up for e-mail newsletters