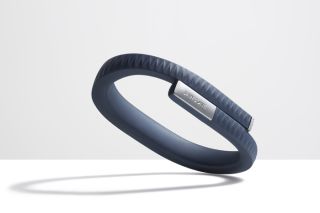 BUY the Jawbone Up >>>
Jawbone Up
Amazon
$99.99
View
We check over 130 million products every day for the best prices

After a week of wearing the Jawbone Up, I was pretty impressed with this nifty device. It told me how well I'd slept, how many steps I'd taken, how far I'd walked, how many calories I'd burned — all within a colorful and smartly designed app. Though the Up has some downsides, the device can definitely make a difference in how you approach your fitness. Here's a look at how it performed in several categories:

The pros of the Jawbone Up, compared with other fitness trackers, are that it provides rich and useful data, it's easy to find the information you're looking for in the app, and it allows you to scan food barcodes to input nutrition information.

The cons of the Up include that you have to physically plug the device into your phone to sync it with the app, and that it's a bit bulky.

The Jawbone Up is a soft rubber wristband that resembles a mini coil, like a snake. I've seen the Up called the most fashionable of the wearable fitness trackers, but to me it was a bit bulky, and the black model I had didn't exactly fit with my "style." I found it somewhat more annoying to wear than some of the lighter, flatter fitness wristbands, like the Fitbit Flex. However, I did get used to it fairly quickly and overall it wasn't a burden.

Unlike some other trackers, the Up doesn't have Bluetooth, so to sync the wristband with its app, you have to plug the end of the band into your phone. This was sometimes annoying, and meant I didn't check my stats quite as often as I did with trackers that synced automatically via Bluetooth.

But I will give the Up bonus points for the design of its app, which of all the activity tracker apps I tried, was the most pleasing and fun to use. The colors and display of the data were clear and engaging, and the app was super-easy to learn without reading instructions.

I don't have a single complaint about learning to use the Jawbone Up. I read only the bare minimum of the instructions, and was largely able to figure out everything by downloading the app, plugging in the Up, and exploring.

There's a lot of functionality packed into the app, and it's pretty easy to find the information you want, from how to track daily steps to more complicated tasks like setting alerts to remind you to get up from your desk, and comparing trends over time, such as how your sleep correlates with what you eat or how much you exercise.

However, telling the app what I ate was sometimes a chore, and although it has a large library of common foods, it didn't always recognize the foods I searched for. But the app does allow users to add foods, as well as scan the barcodes of some foods to automatically input their nutrition information.

The Jawbone Up collects a good amount of data about your fitness, and presents it in a clear way designed to help you draw conclusions and change your habits. It was fascinating to see how many miles I actually covered doing errands and walking to the subway, and even more revealing to see how my daily level of activity correlated with other data points, such as how much I ate or how well I slept.

In general, motion trackers including the Up aren't as accurate in calculating steps and distance covered as basic hip pedometers, or GPS distance trackers. If you wave your arms around while sitting still, the Up will still think you're walking. Meanwhile, if you're walking and carrying something heavy, but keeping your wrist extremely steady, you might not get points for those steps.

Still, the Up's readouts were a good basic measurement, and were pretty self-consistent over time, so they worked for looking at trends from day to day or week to week.

I found the Up's sleep readings slightly more accurate and useful than the Fitbit Flex's, though it seems all activity trackers can misinterpret stillness for sleep.

The Jawbone Up gets extra points for giving fun daily health tips, and offering more information overall to help you interpret your own fitness data. It also allows you to input your mood and see how this correlates with exercise, diet and sleep. [How Counties Rank in Obesity and Physical Fitness Rates (Infographic)]

Some days I was a lot more engaged with the Jawbone Up than others.

Because you have to plug the device into your phone to see your latest data, there's more of a barrier to opening the app frequently to check your progress. Of course, this syncing progress goes quickly, so I still plugged it in and checked my stats multiple times a day. But when I was really busy, I tended to ignore my Up, and it had less of an effect on my life.

On the other hand, I found the data it provided to be richer and more illuminating than some other devices, so in that sense, it did have an advantage in helping me adjust my behavior for better health. Ultimately, of course, how much I changed, and how much I got out of the Jawbone Up depended on how much energy and attention I put into it.

Jawbone Up
Amazon
$99.99
View
We check over 130 million products every day for the best prices