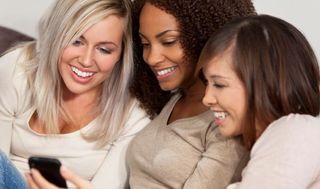 Obesity spreads "contagiously" through social networks, claimed a highly publicized 2007 study, and since then, some researchers have been working to use social networks to reverse the nation's obesity epidemic. A study published today suggests that may be possible.

Researchers at MIT found that by bringing people who had similar traits together into a social network, with the aim of increasing physical fitness, they increased how many people picked up a new activity that could bring about healthy lifestyle changes.

"The most effective social environment for increasing the 'willingness' of obese individuals to adopt the behavior was the one in which they interacted with others with similar health characteristics," the authors wrote in their conclusions.

The study may open up new avenues of research.

For the study, researchers worked with 710 participants, most of whom were women, who had enrolled in an online fitness program. They randomly divided the participants into two groups — in one group, people were assigned into networks of friends randomly, while in the other, participants were assigned "health buddies" based on similar age, gender and BMI.

Participants were able to see anonymous profiles of their health buddies, as well as certain fitness activities they did, such as the time they spent exercising and whether they were keeping a "diet diary" – writing down the foods they ate.

It was this diary the researchers targeted, seeing whether people began keeping one once others in their group did. The researchers found that being in a network matched for common traits made people three times more likely to adopt the new health habit.

While public health researchers may target network-based interventions for weight loss, Browning says the research can also provide some insight for anyone who wants to lose weight.

At the simplest level, Browning said, the research can be about recognizing the influence of peers.

"Too often, individuals think that the blame for their obesity or lack of physical activity rests solely on their shoulders," Browning said. "This provides evidence that that's not entirely true."

"It may be very influenced by their social network," Browning said. For example, if your friends are going to a bar and not playing sports in their free time, you are likely to fall in with them, rather than striking out on your own at a gym.

"It's not an out," he said, but a matter of recognizing the role friends are playing.

While not well-studied, Browning noted that researchers have observed that some people who sustain weight loss for a long period also change who they spend their time with — for example, a divorce or a move might be involved.

"Some of those individuals completely change their social network, and get out of one and move into another," he said. "The social network they land in has more of these healthful behaviors."

And so, changing your behaviors may be easier if you bring someone new into your group, such as a personal trainer, who can bring better habits and activities that promote health, Browning said.

"Take your social network you have and bring in that seed individual," he said.

While the study showed some success, Browning noted the results may not apply to everyone. There were proportionately fewer obese people in the study than in the general population, and because the sample was obtained from a fitness group, people involved were already looking for ways to get healthier.

Additionally, it remains unclear how other new health behaviors might spread through a group, because keeping a log of what you eat is easier than beginning a rigorous exercise program.

"What we probably have here is a best case in terms of adoption of behavior. You have a lot of things working in your favor," Browning said.

Still, the study pushes the research in the right direction, he said.

"This is a nice, elegant way to start the discussion of how to do interventions with regards to social networks."

The study will be published tomorrow (Dec. 2) in the journal Science.