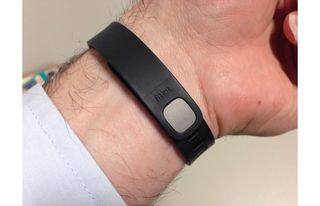 The Fitbit Flex is an activity tracker aimed at measuring your exercise, diet and sleep. The device was my constant companion for about a week, and by the end of it, I felt informed about my activity levels, and was motivated to get moving. While the Fitbit has some frustrating features, it's also simple, comfortable and useful, and I found myself surprisingly addicted to checking my progress. Here's a breakdown of how it did in several areas:

The pros of the Fitbit Flex compared with other fitness trackers include that it is lighter and flatter than others, it syncs wirelessly with your phone, and your daily progress is visible on the band itself.

The cons include the unusually high number of taps it takes to access certain features, as well as a lack of explanation and interpretation for some of the data it provides.

The wristband and I got off on the wrong foot when I tried and failed for a few minutes to fasten it around my wrist. When I read the instructions, however, I was able to snap it into place, and after a week of use, the band became a bit more flexible, and was easy to take off and put back on again.

The Fitbit Flex is lightweight and very comfortable — I found it less intrusive and unwieldy than some heavier fitness wristbands. I hardly took it off for a week, and soon got used to its presence.

The band is flat, about the width of a watchband, and made of a soft, rubbery material in a single color (you can choose from a few options). While it's not quite fashionable, it also isn't ugly and doesn't stand out.

The Fitbit syncs with your phone via Bluetooth, so there's no need to plug it in to your phone to check your stats — a fact that made me more likely to open the app and check up on myself throughout the day.

In general, the Fitbit Flex is easy to use, and the first time I plugged it in and got the app up and running, I was able to navigate it easily. The app display is simple and clean, and communicated most of what I wanted to see at first glance.

Some features, though, were unnecessarily hard to reach. For example, to tell the Fitbit I was going to bed so it could start tracking my sleep, I had to open the app, tap on the "More" tab, tap on the third option down, "Sleep," then tap on a "+" sign next to a bar labeled "Logged Sleep," before I was presented with the option, "Begin Sleep Now."

This should have been possible with a lot fewer taps, ideally directly from the home page. It was certainly much more laborious than telling the Jawbone Up you're going to sleep, for example, which can be accomplished with a simple tap on the device, without the need to open the app at all.

The Fitbit captures a good amount of data for you, and can track even more if you take the time to enter data about your meals, your weight and other such information, such as the amount of water you drink every day.

If you input only your basic stats (height, weight, age, etc.) to begin, and strap on the device, it'll tell you your daily number of steps taken, distance traveled on foot, minutes spent being very active and calories burned. If you tip it off every night that you're heading to bed, and tell it when you're awake again in the morning, it will use motion to track how much time you're actually asleep while in bed, and how restless you were.

All this info is fun to see, and the Fitbit presents everything in terms of a percentage toward a goal. You can set a goal yourself, or use its default goal, which for me was 10,000 steps, 5 miles, 30 very active minutes and 2,184 calories burned.

Not all the data were well-explained, though. For example, there was no explanation for how it arrived at my default calorie goal. On some days, I exceeded Fitbit's goal for steps taken and distance walked, as well as very active minutes, but I was still well away from meeting the goal for calories burned. Why? I would have liked some tips on what I could do to meet the calorie-burning goal, or an explanation for why the calorie goal didn't correlate with the activity goals.

I had mixed success with the sleep tracker, but generally felt that it wasn't especially accurate. There were nights I knew I awoke several times, but the Fitbit told me I'd slept straight through — natural limitations of tracking sleep based on only wrist motion.

The Fitbit was a fun companion. Overall, its ease of use and comfort made me enjoy wearing it, and I found the data it offered informative and motivating.

One simple feature made a big difference in how I felt about wearing the device. On the wristband, a small plastic strip will show your progress toward your daily steps goal via dots representing 20 percent increments. I found myself frequently tapping, just to see the pretty glowing dots appear and get an update. And that simple action in turn made me more motivated to increase my activity, without even needing to open the app. This gave the Fitbit the edge over devices that only give you feedback once you open their apps.

I did find the Fitbit influenced my behavior, occasionally giving me the extra push I needed to take a walk around the block, to up my steps tally. Ultimately, it probably didn't change my health habits too much, and it definitely didn't transform me into the fitness fiend I sometimes wish I were, but that's not surprising. No device can get you off your butt when you don't want to.

Fitbit Flex
Amazon
$87.19
View
We check over 130 million products every day for the best prices
View All Deals