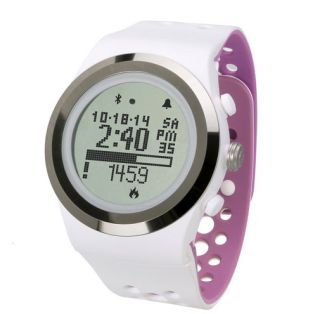 The LifeTrak Brite R450 is a new fitness tracker from Salutron that aims to provide a comprehensive view of health and fitness.

The R450 certainly does have a lot of bells and whistles — it tracks your daily steps, distance, calories burned, heart rate and workouts, and automatically detects when you fall asleep and wake up. The device vibrates to alert you when you need to be more active, and it includes an alarm that the company says will wake you up at an optimal time that's based on how well you've slept. The device starts at around $120 on Amazon, putting it in the middle of the price range for fitness trackers.

The Brite R450 is also one of the few fitness trackers that monitors your light exposure, including blue light. (It is thought that too much blue light exposure before bedtime could interfere with sleeping well.) The company also says the device can tell you when you need more natural light.

The device also has some smartwatch features, including alerts for incoming calls, texts and emails, as well as calendar reminders. And it is waterproof up to 90 feet, so you can wear it while you are in the shower or swimming. All of these features sound good in theory, but how does the device work in practice? I tested it for a week to find out.

The pros of the LifeTrak Brite R450 include automatic sleep detection, a vibrating alarm and an ambient-light detector that can tell you when you need more natural light.

The cons of the R450 include a slow syncing process, bugs in sleep detection and a strap that is somewhat uncomfortable.

The Brite R450 has a large, circular screen surrounded by a ring of metal that I thought looked quite sleek. The display is easy to read, and the screen is always on, so you don’t have to push any buttons to see the time of day. But if you're in the dark, you'll need to turn on the backlight by holding down a button on the side of the device.

I was disappointed with the device's strap — it has a plastic feel, and it is hard to put on. The strap is adjustable, but because it is somewhat ridged, I found it hard to adjust it to one of the smaller sizes.

The device has three buttons on the right side. When you press the top "mode" button, you toggle through viewing: your notifications about calls and texts, a graph of your hourly activity, a graph of your weekly activity and a screen to track your workouts separately. The middle "view" button lets you see your basic stats: total sleep time, distance walked, calories burned and total steps for the day. You see these stats on the bottom of the screen, below the time of day, along with a progress bar that shows how close you are to completing your goal for the day. Also, you hold down this middle button to check your heart rate. The bottom button is the "start/stop" button, which you press to start/stop your workouts. You also hold it down when you want to sync the device to your smartphone (which syncs wirelessly via Bluetooth).

People who do not have smartphones may find the Brite R450 more appealing than other fitness trackers, because although it helps to have the LifeTrak app, it is not essential for using the device — you can view your weekly activity on the device itself. You can even manually enter all your information (height, weight, etc.) into the device itself, without the app, as well as set your goals and alarms. But this does require a lot of button pushing, and it's definitely easier to enter your information through the app.

Unlike many other fitness trackers in its price range, the Brite R450 battery does not need to be charged — it lasts about six months before you'll need to replace it.

The Brite R450 has three navigation buttons, and each performs a different function, depending on whether you press the button once, twice or hold it down. This makes for quite a complex fitness tracker. For this reason, you'll want to give the user guide a read before you strap the tracker on your wrist and head out the door.

Performing basic functions on the device, like starting workouts and viewing your stats, is pretty easy, once you've familiarized yourself with all those buttons.

However, I found it tricky to get the device to check my heart rate — I would often need to do a reading multiple times before it would show a measurement. This may have been because the device did not fit me properly, as I had a hard time adjusting the strap to fit my wrist. Also, unlike some other fitness trackers that also track heart rate — like the Basis Peak and the upcoming Fitbit Charge HR — the LifeTrak does not measure heart rate continually throughout the day. Instead, the Brite R450 performs a measurement only when you tell it to.

Syncing the wristband with the LifeTrak app proved frustrating. First, I attempted to pair the device with my iPhone 4S, but I kept getting the message "Pairing Failed," even after I tried suggestions from the company for fixing pairing problems. I then tried an iPhone 5, and my R450 was able to pair, but the syncing process took forever. Seriously, it was several minutes. This is much longer than many of the other fitness trackers I've used, which usually sync in a matter of seconds. Because it took so long to pair, I would sync the device and then go do something else. Sometimes it would take several minutes, and then tell me there was a problem, and I would have to start again. I can only hope that the time it takes to sync will improve with newer versions of the app.

I also encountered problems with the device's sleep tracking. You don't have put the device into sleep-tracking mode, because the Brite R450 is able to automatically detect when you fall asleep, based on your motion, arm posture and ambient light. This is an appealing feature for people who don't want to remember to put their device in sleep mode every night. The first night I used the R450, the automatic sleep detection worked well — the device seemed to be able to detect when I was asleep and when I woke up fairly accurately. But the next few nights, the device did not track my sleep at all (it said I got zero hours of sleep). After exchanging emails with the company, I was told there was a bug in the app that turns off sleep detection in some cases, which the company is working to fix. (A representative told me this update would be available fairly soon.) But on the device itself, I was able to follow some steps to turn it back on, and after that, sleep detection worked again.

The ambient-light detection is an interesting feature, but for it to work, you have to keep the watch face from being covered by a sleeve from your sweater, jacket or coat. Because I tested the device in winter, the Brite R450 was almost always covered by my sleeve when I was outdoors, so it usually didn't detect when I had been outside. This is not a criticism of the watch design, but I think that users in cold climates should be aware that the ability of the device to detect when you're outside may be a problem when you're wearing winter clothes.

Although the LifeTrak Brite R450 tracks a lot of things, it provides very little information about what your stats actually mean. For example, although the default step goal is 10,000 steps a day, LifeTrak does not provide information about how much exercise you need to "be healthy." Not everyone cares about this type of information, but those who are just starting to track their distance/steps may be interested in knowing more specifically what they should aim for, and other fitness trackers do give users more insight into their activity. For example, the Withings Pulse O2 explains that people should aim to get 150 minutes of moderate activity per week (as recommended by the World Health Organization), and the Fitbug Orb looks at your activity for the past week to provide personal targets for total steps, aerobic steps and calorie intake.

Also, although the Brite R450 is one of just a few trackers that can track ambient light, it provides very little information about what to take away from your data. A graph in the app shows you your exposure to "all light" and "blue rich light" over time, and the app tells you how many minutes you were exposed to "bright light." The app suggests you get about 30 minutes a day of bright-light exposure. But is it bad if you get more or less than that? The app does not say. Also, the device did not tell me whether I needed more or less blue light, or whether I was exposed to blue light at the wrong time of day.

The physical vibrations from the Brite R450 on your wrist, and the messages to "get more light" or "walk now" may provide the extra nudge you need to get moving throughout the day.

In the app, next to each of your metrics you'll see a circle that fills with color as you get nearer to completing your goal for that day. When you complete a goal, you'll see a green check mark next to that metric. This is a quick way to see how active you are throughout the day. On the device itself, the R450 also displays your progress with a progress bar. If you see that you've nearly completed your goal, you may be motivated to go out and walk a little more.

The device does not have a way for you to connect with friends, however, or share your progress on social media sites, which may be a motivation for some.