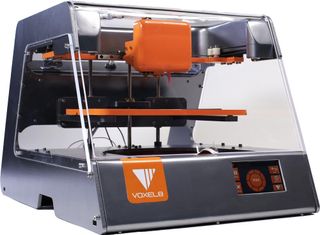 Voxel8's 3D printer is capable of printing in both conventional plastic and conductive ink, allowing it to print objects with embedded electronic components.
(Image: © Voxel8)

Amid the rough-edged replicas of superheroes and army tanks that adorned the expo's 3D printing space stood a machine that prints tiny medical implants that dissolve inside the human body. Another printer uses a combination of conductive inks and filaments to print quadcopters already embedded with the electronics that allow them to hover in the air. One company displayed a prototype of a 3D-printed medical device that can automatically stitch up patients after surgery.

The message these companies are sending couldn't be clearer: 3D printing isn't just for makers anymore. Increasingly, this trendy technology is turning into a must-have tool for doctors, researchers and engineers, according to Nick Liverman, CEO and founder of Old World Labs (OWL), a Virginia-based company that designs dissolvable 3D-printed implants. [The 10 Weirdest Things Created By 3D Printing]

"[Most] 3D printers are made to print what's already out there — a model version of the Eiffel Tower or a chess set. But you would use our printer to build things that aren't developed yet: theories, research. It's paperwork that now can become real," Liverman told Live Science.

OWL's MC-1 and MC-2 printers were both on display at CES. The machines use a process known as stereolithography (SLA), in which lasers harden layers of liquid plastic, or resin, into three-dimensional shapes. This technique sets OWL's printers apart from other 3D printers on the market, such as MakerBot's Replicator or the Ultimaker 2, that use a process known as fused deposition modeling (FDM), not SLA.

In FDM, heated plastic is released layer by layer onto a platform to create a 3D object, a process that results in a much less detailed product with a rougher finish than objects created using SLA. Other 3D printers on the market also use stereolithography to build what Liverman calls "high-resolution" objects. But OWL's machines are more advanced than these printers, according to Liverman, who said that his company's machines print objects that are 200 times more accurate, or truer to their original design, than objects created with other SLA printers.

OWL is currently using its super-accurate printers to bring complex ideas to life. For example, cancer researchers who want to deliver localized treatments to patients are using OWL's machines to build what Liverman called "microfluidic devices." Such devices are highly detailed, containing tiny channels that circulate prescription drugs into a patient's body.

"You can also build custom implants, like tissue scaffolds," Liverman said. "You can inject stem cells into the scaffold that you build with the printer and then you can, for example, do a cartilage replacement on a knee." [7 Cool Uses of 3D Printing in Medicine]

During cartilage replacement surgery, the scaffold containing the stem cells would be implanted in the knee, where the stem cells grow to replace the missing cartilage, Liverman said. The scaffold, which is printed with what Liverman called "bioreabsorbable material," eventually dissolves harmlessly inside the body. OWL is currently working on obtaining long-term FDA approval for the resins used in its printing process. This would allow the company's clients, which include NASA and Virginia Tech, to print such scaffolds and other medical-grade devices and use them in real-world settings, not just in the lab.

OWL wasn't the only progressive 3D printing company hawking its wears at CES. Harvard-based startup Voxel8 was there, too. The company's 3D printers have two extruders — one that prints in conventional plastic filaments and another that squirts out highly conductive ink.

"Coming off the printer is not just a plastic shape but a fully functioning electronic device," said Voxel8 co-founder Daniel Oliver.

At CES, Voxel8 showed off a quadcopter printed with its machine. The flying toy was built in layers — the structure of the device was printed in plastic with cavities carved out for the control logic board and the motors. The printer then used conductive ink (which takes the place of wires) on top of the plastic, connecting these electrical components. The ink, along with the imbedded electronics, eventually got covered up with more layers of plastic.

Of course, Voxel8's printer is designed to do more than just print tiny drones. The company will also be releasing new printing materials in order to try its hand at printing resistors, sensors and, for future models of its printer, even lithium-ion batteries. These objects are in addition to the custom circuit boards that Voxel8's printers have already perfected.

"We're talking about printing out a circuit at your desk in less than 30 minutes," Oliver said. This represents a vast improvement over earlier options for printing custom circuit boards, a process that, Oliver said, traditionally could take up to a month to complete.

Engineers and developers will not only be able to realize their designs much quicker with a Voxel8 printer, they'll also be able to try out unconventional geometries for their electronics, Oliver said. For example, rather than trying to get a rectangular circuit board to fit inside a curved object, it will now be possible to customize the shape of a circuit so that it fits inside objects of any shape or size.

"There's a trend to try to get 3D printing to create more useful things," Oliver told Live Science. "[We're] getting closer and closer to the idea that anything can be 3D printed."