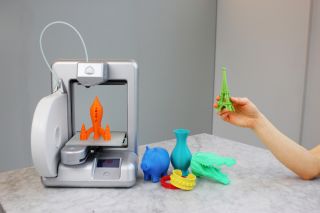 Additive manufacturing, or 3D printing, has been a popular method of creating prototypes since the 1980s and is quickly becoming the fastest, most affordable way to create custom consumer goods, as well. But how does this trendy technology work?

There are several different methods of 3D printing, but the most widely used is a process known as Fused Deposition Modeling (FDM). FDM printers use a thermoplastic filament, which is heated to its melting point and then extruded, layer by layer, to create a three dimensional object.

The technology behind FDM was invented in the 1980s by Scott Crump, co-founder and chairman of Stratasys Ltd., a leading manufacturer of 3D printers. Other 3D printing organizations have since adopted similar technologies under different names. The Brooklyn-based company MakerBot (now owned by Stratasys), was founded on a nearly identical technology known as Fused Filament Fabrication (FFF).

Objects created with an FDM printer start out as computer-aided design (CAD) files. Before an object can be printed, its CAD file must be converted to a format that a 3D printer can understand — usually .STL format.

FDM printers use two kinds of materials, a modeling material, which constitutes the finished object, and a support material, which acts as a scaffolding to support the object as it's being printed.

During printing, these materials take the form of plastic threads, or filaments, which are unwound from a coil and fed through an extrusion nozzle. The nozzle melts the filaments and extrudes them onto a base, sometimes called a build platform or table. Both the nozzle and the base are controlled by a computer that translates the dimensions of an object into X, Y and Z coordinates for the nozzle and base to follow during printing.

In a typical FDM system, the extrusion nozzle moves over the build platform horizontally and vertically, "drawing" a cross section of an object onto the platform. This thin layer of plastic cools and hardens, immediately binding to the layer beneath it. Once a layer is completed, the base is lowered — usually by about one-sixteenth of an inch — to make room for the next layer of plastic.

Once an object comes off the FDM printer, its support materials are removed either by soaking the object in a water and detergent solution or, in the case of thermoplastic supports, snapping the support material off by hand. Objects may also be sanded, milled, painted or plated to improve their function and appearance.

FDM is popular with companies in a variety of industries, from automotive (BMW, Hyundai, Lamborghini) to consumer goods manufacturing (Black and Decker, Dial, Nestle). These companies use FDM throughout their product development, prototyping and manufacturing processes.

The most common printing material for FDM is acrylonitrile butadiene styrene (ABS), a common thermoplastic that's used to make many consumer products, from LEGO bricks to whitewater canoes. Along with ABS, some FDM machines also print in other thermoplastics, like polycarbonate (PC) or polyetherimide (PEI). Support materials are usually water-soluble wax or brittle thermoplastics, like polyphenylsulfone (PPSF).

Thermoplastics can endure heat, chemicals and mechanical stress, which makes them an ideal material for printing prototypes that must withstand testing. And because FDM can print highly detailed objects, it's also commonly used by engineers that need to test parts for fit and form.

FDM is also used to produce end-use parts — particularly small, detailed parts and specialized manufacturing tools. Some thermoplastics can even be used in food and drug packaging, making FDM a popular 3D printing method within the medical industry.

Professional FDM printers typically cost between $10,000 and $300,000, which makes them one of the cheapest options for businesses investing in a complete 3D printing system.

While Stratasys is responsible for inventing FDM, it's not the only company profiting from this technology. Over the past two decades, FDM has become the most widely used 3D printing method in the world.

Many companies that manufacture FDM printers also offer a range of 3D printing services to clients, including external 3D modeling and printing.

Some FDM printers — like 3D System's Cube, MakerBot's Replicator and Stratasys' Mojo — are designed for use by hobbyists, inventors, do-it-yourselfers and small business owners. They're small, efficient and user-friendly.

But having one of these 3D printers in your home doesn't come cheap. The Cube is among the most affordable desktop FDM printers on the market at $1,299. MakerBot's machines are even more expensive, ranging in price from $2,549 to $3,299. And Stratasys' Mojo costs just under $10,000.

However, this popular technology is becoming less expensive as 3D printing startups, like the California-based Pirate3D, seek to bring 3D technology into the homes of average consumers. Pirate3D's Buccaneer, which is due out in December 2013 sells for just $347.

3D enthusiasts that don't wish to purchase a desktop FDM printer can build their own. There are many sites selling kits and parts for the "replicating rapid-prototyper" or RepRap, an open-source 3D printer design project founded at the University of Bath in the U.K. This FDM printer is continually being improved, but the ultimate goal of the project is to create a 3D printer that can print new copies of itself.

For the latest news and features about 3D Printing, visit: