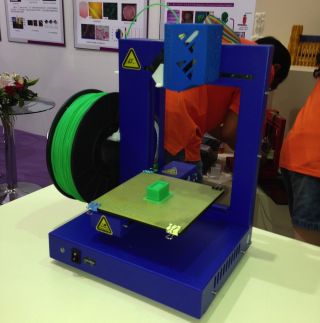 The UP! 3D printer, billed as the "Micro Factory for Anyone Anywhere Anytime." The UP! is sold by PP3DP, a subsidiary of Delta Micro Factory Corporation, and costs about $1,500.
(Image: © Hod Lipson )

Melba Kurman, author, and Hod Lipson, Cornell University associate professor in mechanical and aerospace engineering, are co-authors of "Fabricated: The New World of 3D Printing" (John Wiley & Sons, 2013) and leading voices in the field of 3D printing. They contributed this article to LiveScience's Expert Voices: Op-Ed & Insights as part of their new LiveScience series highlighting issues and developments in 3D-printing technology.

If you want to start a fight at a party full of people passionate about 3D printing, just mention technology patents. Immediately, people will stake out their positions and the room will erupt into chaos. Blogger Paul Banwatt sums up the debate nicely as a standoff between those "who believe that patents have held back 3D-printing technology and those who believe that patents have really incentivized innovation."

Patents are like people. Some do good things and try to help others. Other patents behave like greedy bureaucrats by hiding behind rules and regulations and getting in the way of forward progress. Just to be clear here, in this article we're not talking about the unresolved, looming battle over pirating or the 3D printing of unauthorized copies of IP (intellectual property)-protected designs. We mean patents on actual 3D-printing processes, tools and materials that are filed by companies that make and sell 3D printers and related technologies.

Patents drive technological advancement, but not in the way most people think. Conventional wisdom suggests that the temporary monopoly a patent gives a company enables that business to re-coup its earlier investment in the research and development (R&D) and attorney fees that generated the patent. When it comes to 3D-printing technology, conventional wisdom tells only a small part of the story. [The 10 Weirdest Things Created by 3D Printing]

Vast, open expanses of technological green fields are nice. But as Amazon CEO Jeff Bezos put it, "Frugality drives innovation, just like other constraints do. One of the only ways to get out of a tight box is to invent your way out." Bezos was referring to Amazon's early cash-poor days when, lacking a fat advertising budget, the company innovated around its constraints and eventually created its game-changing associates program.

Several innovative 3D-printing technologies are the fruit of patent-induced constraints. Over the past few decades, to play on the commercial battlefield, 3D-printing companies were forced to come up with technological workarounds to develop their own commercial 3D printers and related products. To avoid patent lawsuits, 3D-printing companies innovated their way out of a "tight box" by inventing around other companies' technology patents. As rival companies navigated their way around patent-induced constraints, they invented yet more innovative technologies.

Innovation in the face of constraints

In this environment, nearly two-dozen novel and important 3D-printing technologies were invented as a direct or indirect response to somebody else's patents. [The Top 10 Inventions That Changed the World]

Here are a few examples:

– Objet invented a new way to 3D print using photo-curable materials without relying on a liquid vat and a laser (a leading technique at the time). Objet's innovative techniques made it possible to print with multiple materials.

– Optomec developed a printing process that sprays metal powder into the path of a laser beam. This novel technique avoids the use of a powder-bed, which opened the door to one of the most promising applications for 3D printing, the fabrication of precisely graded metal alloys

Today, these rival printing technologies benefit users and provide a rich foundation for future inventors, from both commercial and open-source worlds, to build upon. Patents can advance technological innovation because they force inventors to devise new workarounds.

So, returning to the hypothetical 3D-printing party, what problems do people have with 3D printing and patents? If key patents introduce constraints that force technological innovation, why does the controversy over 3D-printing patents continue?

It continues because the debate over the impact of patents seems to be scrambling together two different forms of advancement: technological advancement and a company's ability to launch new commercial printing products.

Let's back up here for a minute and explain one of the hottest patent debates going on in the 3D-printing industry today: the impact of expired patents. The year 2009 marked the expiration date of technology patents for a key printing technology called FDM (invented by Scott Crump in 1989 and formerly owned by Stratasys). FDM is the technology behind the classic layer-by-layer extrusion of a thin plastic stream of material into a 3D pattern, a simple, low-cost technique ideal for consumer machines.

People who view patents as innovation-killers attribute 3D printing's recent growth surge to the expiration of FDM patents. Just a few years after the constraints imposed by FDM patents were lifted, today there are an estimated 100-plus different, low-cost 3D-printer models for sale (most notably MakerBot) that utilize FDM technology. A corresponding number of young companies sell these new consumer 3D printers or are raising funds on Kickstarter to develop their business plans.

One of our favorite intellectual property bloggers, Mike Masnick, put it this way: "Development and innovation [have] been held up for the last couple decades … not because the technology wasn't available, but because of key patents that are apparently needed to build 3D printers." [10 Amazing 3D-Printing Startups]

It's a compelling argument. But there's a subtle point that's being missed in all the heat and noise: The impact of patents on the advancement of 3D-printing technologies is not monolithic. Patents trigger innovation by imposing constraints that force workarounds. These same patents stifle, or at least complicate, the introduction of new commercial products, as evidenced by the expiration of FDM patents and the ensuing landslide of new printers that followed.

In fact, when patents expire, the ensuing products that appear on the market are not necessarily innovative, at least from a technological perspective. Despite the launch of more than 100 commercial 3D printers in the last two years, most of these printers' core technology is FDM, which dates back to the 1980s. If core patents truly blocked technological innovation, these new consumer-scale 3D-printer models on the market should represent a rich bazaar of ingenious new variations and additions that springboard off of old FDM technology.

To add another data point to the debate, there's the case of two early open-source 3D printers launched in 2006: RepRap (created by Adrian Bowyer and his team) and Fab@Home (created by Evan Malone and this article's co-author Hod Lipson). Both systems were simple, do-it-yourself affairs. And, both Fab@home and RepRap were open source, meaning that their machine blueprints were freely available on the Web where anyone could download them.

Thousands of users downloaded these design blueprints and built their own 3D printers at home. Both projects encouraged technological innovation beyond the original blueprints. Several years later, MakerBot's early, commercial 3D printer would borrow many design elements from RepRap and Fab@Home.

After their launch in the mid-2000s, RepRap and Fab@home thrived for years, long before FDM patents expired in 2009. The presence of blocking patents did not discourage do-it-yourselfers from creating innovative new technologies on top of the core, open-sourced machine blueprints. However, and this is the heart of a fine and critical distinction, the presence of blocking patents had a different effect: In the case of open-sourced printers, patents acted as a commercial, not technological, constraint. Users could not necessarily turn their innovations into commercial products without first understanding and skillfully navigating the patent landscape. The Formlabs case is a good example of just how legally complicated the intertwined tangle of patents around a particular printing platform can get.

When patents go bad: blocking the bad ones

Patents force companies and innovators down different paths. Some companies create ways to invent around the barrier. Others tinker with open-sourced versions of the patented technology. Commercially minded users and companies must wait until a key patent expires before they can take advantage of the now-freely available technology; however, they don't necessarily continue to innovate on top of it.

Patents aren't necessarily bad for innovation, even patents on a core technology. However, bad patents do exist. Some companies try to patent a technology or method that's painfully obvious, that is already in broad use or that someone else has already invented. These are patents worth fighting.

Thanks to recent changes in patent law under the American Invents Act, there's a way to prevent the issuance of such patents. With help from 3D-printing experts and researchers, the Electronic Frontier Foundation and Harvard's Cyberlaw Clinic have devised an admirable approach to block bad patents — they collect evidence of prior art and submit it to the U.S. Patent Office. The groups have already blocked six patent applications this way.

Going forward, the issue of patents will continue to sow dissent in the 3D-printing community. Intellectual property issues tap into people's core ideologies about appropriate degrees of private ownership and the placement of the boundary between intellectual commons and private commercial interests. In addition, intellectual property laws unfortunately can (and will) be misused and abused by unethical companies and individuals. We hope that as 3D printing continues to develop commercially, the black-and-white debate over the value of patents will embrace gradations of grey and aim its energy at legally preventing the issuance of bad patents on technologies that already exist.

Kuman and Lipson's most recent Op-Ed was"Is Eco-Friendly 3D Printing a Myth?" Follow Kurman @melbakurman. The views expressed are those of the authors and do not necessarily reflect the views of the publisher. This article was originally published on LiveScience.com.