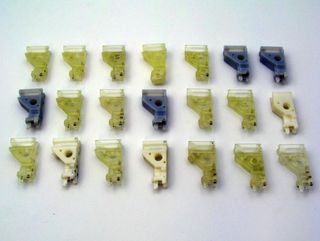 An example of a design project gone haywire. These nearly identical variations of a design in progress were found littering the floor next to a 3D printer in a university lab. It's a good thing that a student could fabricate so many design prototypes in a single night. However, easy access to manufacturing tools might encourage a polluting, "physical debugging" mindset.
(Image: © Hod Lipson)

Melba Kurman, author, and Hod Lipson, Cornell University associate professor in mechanical and aerospace engineering, are co-authors of "Fabricated: The New World of 3D Printing" (John Wiley & Sons, 2013) and leading voices in the field of 3D printing. They contributed this article to LiveScience's Expert Voices: Op-Ed & Insights as part of their new LiveScience series highlighting issues and developments in 3D-printing technology.

A few years ago, the consensus was happily (and naively) positive that 3D printing was innately greener than conventional manufacturing technologies. The truth is that today, the jury is still out. Society is growing wiser and maybe a bit more skeptical.

Recent research offers the grim estimate that, worldwide, about 2 million deaths each year are caused by air pollution, much of it generated by industrial manufacturing. Manufacturing is generally polluting, no matter how it's done. Ecologically speaking, 3D printing both giveth and taketh away.

– Maintains a strong mass-manufacturing base, but raises product values to high margins and supports skilled labor in biotech, new materials, IT and specialized, high-end manufacturing;

– Has the ability to help designers develop parts and products for optimal performance, which could include reduced weight or longer product lives;

– Makes more efficient use of raw materials: The 3D printing process places raw material only where it's needed (an ability referred to as "net shape manufacturing");

– Reduces the number of parts that need assembly, shortening supply chains; and

– Can fabricate small batches of custom parts at the time of need (reducing inventory maintenance) near the point of purchase or consumption (reducing transportation pollution).

The reality today is that the technology is not there yet. Despite the potential of additive manufacturing to promote cleaner manufacturing, 3D-printing technologies aren't yet eco-friendly. A 3D printer — no matter what sort of raw material it's working with — is an energy hog. [The 10 Best 3D Printers of 2013]

Research at Loughborough University in the United Kingdom (in a study called the Atkins Project) revealed that the 3D-printing process consumes a frightening amount of electrical energy. Researchers compared industrial-grade printers to injection molding machines. They learned that 3D printers that use heat or a laser to melt plastic consumed an estimated 50 to 100 times more electrical energy than injection molding to make an object of the same weight.

A scourge of plastics

Energy consumption during the manufacturing process aside, another not-so-ideal environmental impact of 3D printed manufacturing is its heavy reliance on plastics. Plastic is rarely good news when it comes to the environment, regardless of what sort of manufacturing technique is involved. However, odd as it may sound, injection molding (the traditional method used to manufacture plastic objects) is actually quite clean in that it leaves behind very few unused plastic pieces.

In contrast, industrial-grade-plastic 3D printers that use powdered or molten polymers leave behind a substantial amount of unused raw material in the print bed. Plastic byproduct left behind in a print job can sometimes be reused, but more typically, its material properties are corrupted and therefore no longer suitable. A glimmer of hope is offered by a corn-based printing plastic called PLA that's biodegradable (although its biodegrading process takes many years).

It took years to prove that secondhand smoke was hazardous for your health. Recent groundbreaking research led by Brent Stephens suggests that secondhand printing fumes contain toxic byproducts given off when plastic is heated to high temperatures. For years, printing aficionados have remarked on the fact that certain 3D-printing plastics give off a nice, cozy smell, similar to burning corn kernels. To see whether the burning plastic smell was harmful to living things, Steele measured the air quality inside an air-conditioned office where five desktop 3D printers fabricated small plastic objects (using both ABS and PLA plastics) over the course of two and a half hours.

Air quality analysis revealed that 3D printers could be characterized as "high emitters" of what are known as "ultra fine particles," or UFPs. According to a report from the Heath Effects Institute (HFI), in animal and human studies, observed effects of UFPs included "lung function changes, airway inflammation, enhanced allergic responses, vascular thrombogenic effects, altered endothelial function, altered heart rate and heart rate variability, accelerated atherosclerosis, and increased markers of brain inflammation."The good news about the UFPs emitted by the few 3D printers in Steele’s study was their levels were about the same as cooking indoors. The bad news is that more research is needed on what UFPs, exactly, are emitted by home-scale plastic printers and the impact of UFP emissions in industrial-scale 3D printing environments. In the shorter term, it might be wise to not let your child leave the printer running overnight in her bedroom. And if you're printing plastic at home or in your office, open a window and use a fan to keep the air fresh.

What about the bigger picture? The environmental impact of making products involves several stages beyond the manufacturing process. Every product — no matter whether it's 3D-printed or mass-produced — goes through a product life cycle.

For example, one environmentally devastating stage in a product life cycle is the process of mining  raw material. Another stage that leaves behind a large dirty footprint is the product assembly process. It takes a lot of petroleum-based fuel to ship products to where they're sold. Constructing, heating and cooling retail space takes a heavy toll on the environment as well. The most negative effects come during a product's final act: when it's thrown away.

3D printing might someday encourage a new kind of pollution: rapid garbage generation. Engineers being trained to respect their raw materials are taught "Think twice, cut once." When people get ahold of easy production tools, however, it’s easy to not heed that wise old adage. Like printing draft after draft of a term paper during its painful revision process, designers and tinkerers might find themselves rapidly printing out a series of incremental variations of a design, an environmentally costly process. [Video - 3D Printing: Doodads to Prosthetic Hands]

To unleash 3D printing's potential as a greener manufacturing technology, the key will be to create unique, greener product life cycles. Perhaps one of 3D printing's most promising environmental benefits will be the fact that computer-generated designs help improve a product's form, function, performance and durability. For example, a 3D- printed metal airplane made of computer-designed, lightweight parts would consume less fuel during its lifetime of use.

3D-printed manufacturing could also change the product life cycle by shortening global supply chains, reducing the amount of fuel that's consumed to ship products from place to place. On-the-spot 3D-printed manufacturing would also reduce the environmental costs of maintaining a climate-controlled warehouse to store inventory. Your family doctor could print out a custom hearing aid for you when you need it. Your local car mechanic could print out new parts for your car without having to order them from a supplier far, far away.

Despite improvements in storage technologies and smart-energy grids, renewable energy may always be more prone to fits and starts than burning gas or coal. However, a 3D printer is a versatile beast and can turn on a dime, production-wise. A small manufacturing facility of the future could run several 3D printers, each making a wide variety of different products. This facility could be powered with set amounts of stored renewable energy that would fuel scheduled start-and-stop 3D-printed production runs.  Someday, it would be great to see agile 3D-printing facilities that would rapidly adjust fabrication rates to the level of available renewable power, instead of the other way around.

As Earth staggers under the weight of pollution, humanity needs to better balance the health of the environment against a global consumer economy that grows larger each year. Despite its promise as a manufacturing technology, there's nothing innately green about 3D printing. As 3D-printing technologies become more widely used in all industries, the resulting environmental impact will depend on how these emerging technologies are put to use.

Kuman and Lipson's most recent Op-Ed was How 3D Printing Will Transform Chinese Manufacturing. Follow Kurman @melbakurman. The views expressed are those of the author and do not necessarily reflect the views of the publisher. This article was originally published on LiveScience.com.