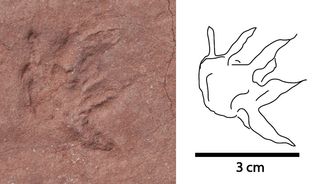 A 118-million-year-old track from a mammal that lived at the time of the dinosaurs, found at an African diamond mine in Angola.
(Image: © Vladimir Pervov)

A Cretaceous gang — made up of a large, long-necked dinosaur; a raccoon-size mammal; and a crocodilelike creature — plodded toward a freshwater lake during the Early Cretaceous period 118 million years ago, leaving their footprints behind in a sedimentary band of earth.

It's possible that the animals satiated their thirst at different times, but left their track marks all in the same area, the researchers said.

The ancient track marks were discovered at Angola's Catoca diamond mine, the fourth-largest diamond mine in the world. The mammalian tracks are a particularly rare find, as most warm-blooded animals at that time were no larger than rats, and this one appears to be larger, researchers said. [See Photos of the Ancient Footprints in Angola]

"Mammals evolved from very small-sized individuals," said Marco Marzola, a paleontologist with the PaleoAngola Project, an international program investigating vertebrate paleontology in Angola. "The first mammals were the size of a squirrel or even smaller, like a mouse. They evolved to become bigger in size, but only after the time of the dinosaurs."

Geologist Vladimir Pervov, who works for the Sociedade Mineira de Catoca,first spotted the 69 animal tracks in December 2010. In addition, 18 dinosaur tracks, likely from a sauropod, and one with preserved skin impressions, were found in two nearby tracks. (Sauropods were long-necked dinosaurs and the largest animals ever to walk the Earth.)

But the ground is hard and cold in December, making the tracks difficult to study. Pervov contacted the scientists working on the PaleoAngola Project, who then asked representatives for the diamond mine to help them preserve the footprints.

"Incredibly, the society of Catocastopped all activity in that sector of the mine," Marzola told Live Science. "[They] renounced potential income from their own mine just to promote science — to promote vertebrate paleontology in Angola and in Africa."

Eight months later, in July 2011, a team of paleontologists came to the mine to study the fossilized prints. Ripple marks in the stone surrounding the fossils suggest a shallow lake may have attracted the animals — the first record of Cretaceous vertebrates in inland Angola,the researchers said.

The mammal tracks, about 30 to 35 in total, provide a rare glimpse of the raccoon-size creature. It had five fingers and five toes, with digits up to 0.6 inches (1.5 centimeters) long, on its hands and feet. As on humans, its longest digit was in the middle, Marzola said.

The mammal also walked like a human and a bear — that is, using most of the foot — instead of walking on its toes, like a cat or dog, or on a hoof, like a horse. The digits show blunt tips, suggesting the mammal did not have claws, Marzola said.

Measuring about 1.1 by 1.3 inches (2.7 by 3.2 cm), the prints suggest that the raccoon-size trackmaker was "exceptionally large for its time," Marzola said. [See Images of a Furry Mammal Ancestor and Descendants]

The researchers compared the creature to Repenomamus, a genus that includes two mammalian species from the Cretaceous period that were between 17 and 27 inches (42 and 68 cm) long. But the Repenomamus fossils are from China, and are 4 million to 7 million years younger than the Angolan tracks. Furthermore, the fossils are missing their hands and feet, so scientists cannot compare them with the tracks at Catoca, Marzola said.

Researchers have scant evidence of mammals from the time of the dinosaurs, and most of what they do have consists of teeth and ear bones, Marzola said.

"We don't have a single skeleton that can be compared in size to such a big animal like [the one] that left those tracks," Marzola said. The findings show how rare fossilized footprints can help researchers learn about these elusive animals, he said.

The team also examined 10 preserved tracks from a crocodilomorph, a group that includes modern and extinct crocodiles and their cousins. The animal had four, curved digits that each ended with a claw mark. They also had a handprint that is laterally rotated about 150 degrees to the side, Marzola said.

"This might look like a bizarre characteristic, but it's not so uncommon," he said. "This characteristic was also found in other track ways that are associated with crocodilomorphof the early Jurassic in North America and France, and the early Cretaceous in Spain."

The third set of fossils, made by one or more dinosaur, left large footprints measuring up to 20 inches (51 cm) wide along two narrow track ways at the diamond mine. Unsurprisingly to scientists, the round track marks did not show any digits. [Images: Denali National Park's Amazing Dinosaur Tracks]

"We don't know any other possible animal in the Cretaceous that could have left such a big track, other than a sauropod dinosaur," Marzola said.

One footprint is one of the few dinosaur footprints in the world to show skin impressions, which is crucial for understanding how dinosaurs looked, he added.

The unpublished research was presented Nov. 5 at the Society of Vertebrate Paleontology's annual meeting in Berlin.