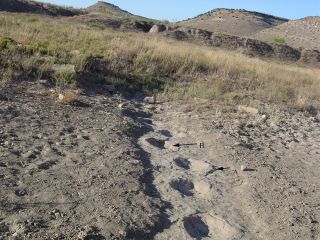 An arrow marks the spot where a dinosaur lost its footing while crossing a slippery mudflat
(Image: © Seth Hammond)

DENVER — Some 150 million years ago, a two-legged dinosaur walking across a mudflat pulled a bit of a vaudevillian pratfall — and left a permanent record of its stumble.

A series of tracks in the Oklahoma panhandle near where the state borders Colorado and New Mexico reveal where a dinosaur slipped and caught itself before continuing on.

The klutzy dinosaur was a theropod, according to research presented Oct. 28 here at the annual meeting of the Geological Society of America. Theropods were a group that included such recognizable meat-eating wonders as T. rex and Deinonychus. [In Images: The Life of Tyrannosaurus Rex]

Researchers aren't sure what species created the tracks in Oklahoma, but the fossils do capture "a frozen moment in time," said study researcher J. Seth Hammond, a graduate student in geosciences at Fort Hays State University in Hays, Kan.

The tracks cross the bed of Carrizo Creek, a seasonal stream north of Kenton, Okla. The paleontologist who first described the tracks in the 1980s reported 47 footprints in a row, Hammond told LiveScience, but because of erosion, only 14 are visible today.

Two of the tracks are particularly interesting. One has a ridge of mud pushed out and up along its side. The other one is strangely deep — about 0.6 inches (1.6 centimeters) deeper than any of the other tracks.

"What we finally decided is, what must have happened is that the dinosaur slipped as it was walking across this really slippery mudflat, and then that's where it caught itself," Hammond said of the second, deep track.

"In a way, what's interesting is the everyday trivia," Hammond said. "He's just walking across a mudflat and slips like anyone else might."

Tracks capturing odd moments in dinosaur life aren't unheard of; one trackway in Glen Rose, Texas, shows what appears to be a sauropod, or long-neck dino, being followed by a two-legged theropod. At one point, there is a missing set of theropod footprints, Hammond said, leading paleontologists to speculate the theropod may have attempted an attack on the sauropod and been lifted out of its tracks.

Dinosaur trackways are found all over North America. Earlier this year, for example, an amateur paleontologist discovered dinner-plate-size prints at NASA's Goddard Space Flight Center in Maryland. Even Alaska sports abundant tracks, including thousands along the Yukon River.

Editor's Note: This story has been updated to correct an instance where we cited "archaeologists" instead of "paleontologists."