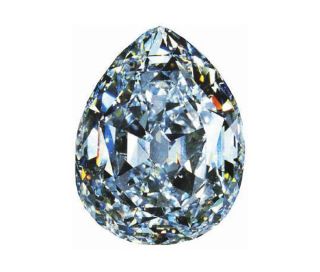 During a routine mine inspection in 1905, superintendent Frederick Wells discovered a 3,106-carat diamond in the Premier Mine in Pretoria, South Africa.

Dubbed the "Cullinan" after mine owner Sir Thomas Cullinan, the 1.33-pound precious gem was at the time the largest rough diamond ever found.

In 1908, the Cullinan was cut into about 100 pieces, resulting in nine large diamonds and many smaller siblings. The largest piece, called "Cullinan I" or "Star of Africa I," is 530 carats and is mounted in the British Sovereign’s Royal Scepter, on display in the Tower of London.

The second-largest stone — "Cullinan II" or "Star of Africa II" — is 317 carats and sits in another crown jewel, the Imperial State Crown. These two diamonds still rank among the top five largest cut diamonds.

Cullinan I was actually the world's largest faceted diamond in world until 1987, when the "Golden Jubilee" stole its title. This 545.67-carat diamond was cut from a 755-carat rough stone that was also discovered in the Premier Mine.

Interestingly, before being given its prestigious name, the Golden Jubilee was known simply as the "Unknown Brown."