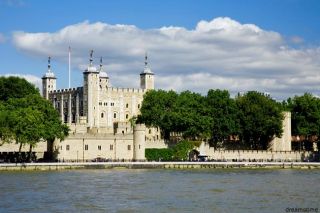 The Tower of London's white tower, built in 1078, as seen from the River Thames.
(Image: © dreamstime)

A moat and fortified walls have protected the Tower of London from vandals for almost 800 years, but against the ravages of pollution, the iconic royal palace doesn’t stand a chance. The entire complex is turning yellow from the exhaust of cars and trucks, according to a new study.

The discoloration is most noticeable at the complex’s White Tower, the original square fortress built by William the Conqueror in 1078. “When we question visitors, they say the color is cream,” said study co-author Peter Brimblecombe, an atmospheric chemist at the University of East Anglia in the United Kingdom. The results are detailed in this month’s issue of the journal Environmental Science and Technology.

In the next 20 years, Brimblecombe said, the famous tower will turn a more brownish yellow. “You might imagine how angry people are going to get about paying a large sum of money to see a yellow tower that’s supposed to be white,” he said.

To measure the color change, Brimblecombe and his colleagues used colorimeters to record the color of stone stored in the tower’s basements—and away from airborne pollution. Placed there through the ages during repairs, the stone provided the team with a timeline of discoloration.

Yet finding the source of the problem led Brimblecombe and his colleagues to another track record of pollution: Patches of black crust found all over the complex’s walls.

Resembling burnt residue in an oven, the crusts are made of gypsum formed when acid in rainwater and pollution reacts with the limestone and mortar. Over time, the gypsum soaks up atmospheric pollution like a stone sponge. Since the advent of coal-burning industry in the late 13th century, the crusts turned black with soot and sulfur from coal smoke.

“We can take off the crust and look at cross-sections,” Brimblecombe said. Like growth rings of a tree trunk slice, which show droughts, fires and other historic events, Brimblecombe said crusts can provide a rough map of pollution through the ages. “It’s not as clear as tree rings, but in thick crusts you can find wood burning particles deep down, topped by coal soot, then modern petroleum,” he said.

Because coal is on its way out and liquid fossil fuels are in, Brimblecombe determined the yellowing of the black crust is coming from petrol.

Internal combustion engines may be equipped with pollution-scrubbing catalytic converters, but an enormous variety of compounds—including nitrogen and organic carbon—escape and float through the air. Brimblecombe said the molecules are increasingly being soaked up by black crusts and the stone itself, slowly replacing soot and feeding bacterial communities.

“The nitrogen acts as a fertilizer on the surface of the building, and the organic carbons are linking together to produce big brown and yellow molecules,” he said, not unlike those which give soil its rich yellow and brown colors.

While Brimblecombe explains no one really knows exactly which compounds create the color, as there can be millions of variations in the chemical structures, he said the problem is manageable. “It’s an old-fashioned technique, but you wash the building,” he said.

Brimblecombe explained that too much washing can damage the stonework. “Our aim is not to clean buildings of their history, but we also don’t want them changing color,” he said. “The aim is to be aware of coming changes, prepare for them and keep them at a publicly-acceptable level.”